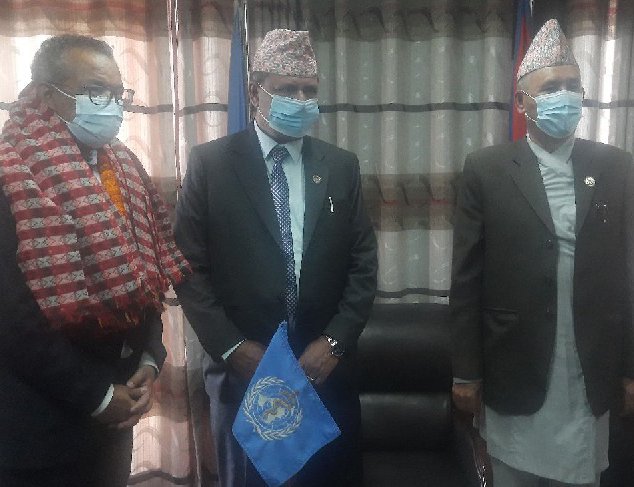 On the occasion, Health Minister Khatiwada lauded the assistance of WHO in connection with the decisive steps taken by Nepal for the eradication of trachoma and eradication of kala-azar. He said that the government aims to fulfill the commitment of the United Nations Sustainable Development Goal No. 3 i.e. People's Health and Fitness by 2030.

According to RSS, the Minister also appreciated WHO's leadership role, decisions and actions in saving the lives of people around the world during the ongoing COVID-19 pandemic. There is need to strengthen the role of the WHO in tackling the health crisis and promoting mutual support and cooperation at the national, regional and global levels.

He requested the Director General of WHO to help set up a Maternal and Child Health Center focusing on pediatric, gynecological and oncology services. During the meeting, Director General Tedros responded positively to the proposal from the Health Minister, said Health Secretary Dr Roshan Pokharel.

Director General Tedros expressed his appreciation for the work done by the Government of Nepal in controlling and preventing COVID-19. The meeting was attended by senior officials of the Ministry and WHO reports RSS..