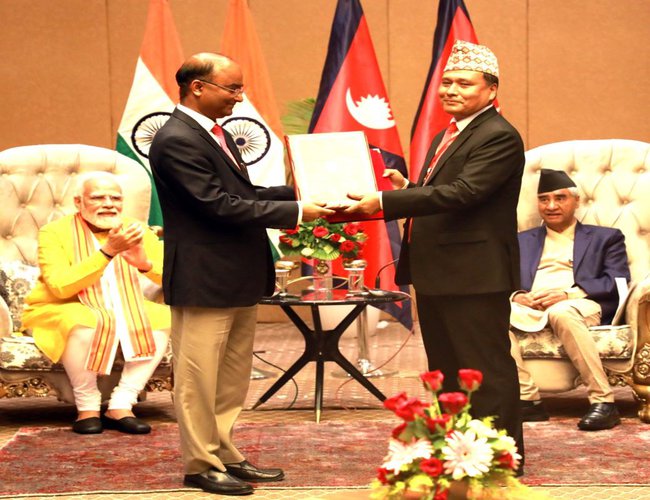 Lumbini, May 16: Six Memorandum of Understandings (MoUs) have been signed between Nepal and India.

The MoUs relating to cooperation in education, culture, and technical matters were signed between the two countries today in presence of the Prime Ministers of Nepal and India, Sher Bahadur Deuba and Narendra Modi respectively.

Indian Prime Minister Modi is on an official visit to Lumbini, Nepal.

The MoUs were signed between the delegations of Nepal and India.

Agreement between the Center for Nepal and Asian Studies (CNAS) and Indian Council for Cultural Relations (ICCR) with Tribhuvan University.

Agreement between Kathmandu University, Nepal, and the Indian Institute of Technology, Madras.

Meanwhile, the Prime Ministers of Nepal and India, Deuba and Modi, have jointly laid the foundation stone of the India International Center for Buddhist Culture and Heritage to be built in Lumbini, Nepal, by the Government of India.

The Prime Minister of India Modi, who arrived in Lumbini on Monday morning on a one-day visit to Nepal, is currently attending various functions in Lumbini.