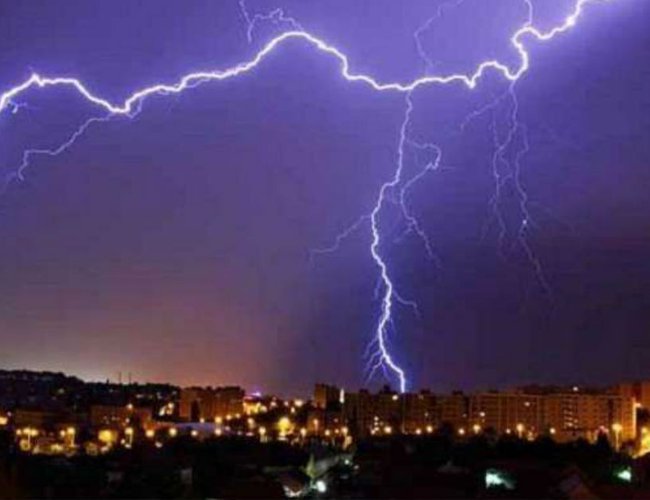 Lightning has been a major natural disaster behind one of the highest numbers of deaths annually across the country.

The National Disaster Risk Reduction and Management Authority (NDRRMA) data shows that a total of 202 cases of lightning were recorded across the country between April 14, 2021 and April 13, 2022.

Since April 14, 2022, the NDRRMA data shows that 10 individuals have already died in a total of 31 lightning incidents until 10 am on May 17. Similarly, 27 individuals have been injured and 49 families affected.

The NDRRMA’s daily bulletin of Tuesday also shows that three individuals died in four incidents of lightning in the past 24 hours.

Lightning had killed three individuals in Sankhuwasabha, Kavrepalanchowk and Jhapa districts. A lightning incident had also caused fire in a house in Sunsari district injuring one individual.

A 56-year-old individual was killed by lightning while he was sitting in the verandah of his house at Ward No. 6 of Dharmadevi Municipality of Sankhuwasabha.

Similarly, lightning also killed a teenager in Ward No. 9 of Roshi Rural Municipality of Kavrepalanchowk. The deceased has been identified as 16-year-old Sajani Lungeli.

Sajani was hit by a lightning strike while returning home after working in the field. She was injured and rushed to a local health centre but died on the way.

In Jhapa, 26-year-old Bhena Hasda was also killed by lightning in Ward No. 2 of Haldibari Rural Municipality. Hasda was returning home from the restroom when he was hit by a lightning strike.

Likewise, in Sunsari, a lightning strike had caused fire in a house at Ward No. 4 of Dewanganj Rural Municipality. An individual was injured, the house completely destroyed and two goats killed in a fire, read the bulletin of NDRRMA.

According to NDRRMA, the peak season of lightning is April to June and it is accompanied by heavy rain and storm. The authority suggests public to stay indoors when raining.

Speaking to The Rising Nepal on different occasion, NDRRMA’s executive chief Anil Pokhrel said, “It is best not to look outside by opening doors and windows or come to railings or verandah when there is lightning.”

Pokhrel added, “It is not certain where a lightning strike will hit due to which one must remain indoors. Individuals, mostly farmers, should return home once the weather changes because open space is dangerous.”

Officials also argued that people ignore the risk of lightning and remain outdoors despite heavy rains. “Lightning can hit anywhere so everyone must remain cautious,” said Pokhrel.

People have also been suggested to equip their houses with grounding system as it allows lightning bolt to discharge into the ground.

The safety measures suggest that one must not have any contact with water (bathe or wash dishes) because lightning can travel along a building’s plumbing. Similarly, individuals are recommended to not use electronic equipment connected to an electrical outlet during heavy rains.

“Deaths by lightning shouldn’t happen because it is easily preventable. We have been supporting awareness campaign across the country but local levels should work more actively to educate the public,” said Pokhrel.

Nepal government has also established nine lightning detection stations across the country in places like Tumlingtar, Biratnagar, Kathmandu, Pokhara, Nepalgunj and Dhangadhi. However, it has not been effective yet to prevent lightning-related incidents.