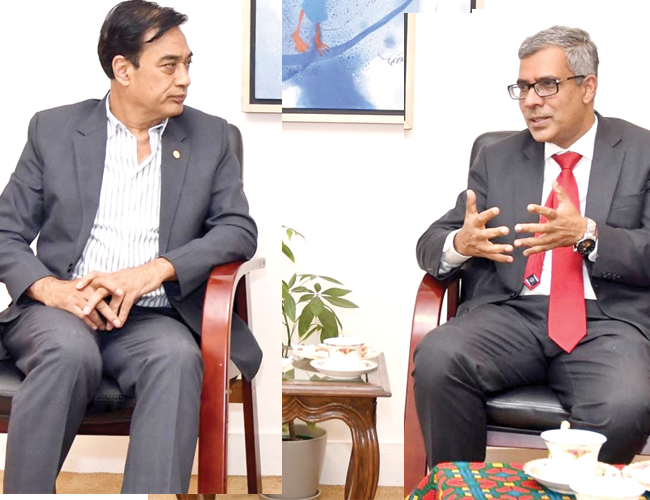 Nepal Chamber of Commerce (NCC) has proposed to Bangladesh to cooperate in the energy sector. The NCC has requested for electricity trade with Bangladesh in the context that Nepal is fast reaching the status of electricity exporter.

Speaking at a program organised at the Bangladesh Embassy in Kathmandu on Friday on the occasion of the 50th anniversary of the establishment of diplomatic relations between Nepal and Bangladesh, NCC President Rajendra Malla stressed on the need for practical implementation of the tripartite agreement on electricity trade between Nepal, India and Bangladesh.

In the discussion with Ambassador of Bangladesh to Nepal, Salahuddin Noman Chowdhury, President Malla said, "Nepal, India and Bangladesh have reached a tripartite agreement for energy trade. For its effective implementation, immediate result-oriented talks are needed between the energy ministers of the three countries.”

According to Malla, Nepal will be able to export electricity in at least one year from now.

At least 50 megawatts of electricity can be generated for export from the existing transmission line in India and all the three countries have to do their homework for other terms and conditions for electricity trade, he said.

In view of the high demand for energy in Bangladesh, the two sides discussed various options for exporting from Nepal, said a press statement of NCC.

Despite the agreement on energy trade between Nepal, Bangladesh and India, it has not been implemented in practice.

Ambassador to Nepal Chowdhury said that Bangladesh is ready to buy electricity generated in Nepal.

He said, "Bangladesh will promote green energy within next few years. Accordingly, our priorities, plans are being made. We are eager to purchase electricity from Nepal.” Ambassador Chowdhury said that he would take initiative with the government of his country to immediately start the necessary process for purchasing electricity from Nepal via India.

However, policy reforms are expected for investment in other sectors in Nepal, he said.

He said that despite the initiative to sign a separate agreement on investment security with Nepal, no result has been achieve