Melamchi Tunnel Will Be Shutdown Before Onset Of Monsoon: Minister Chaudhary

Melamchi Tunnel Will Be Shutdown Before Onset Of Monsoon: Minister Chaudhary 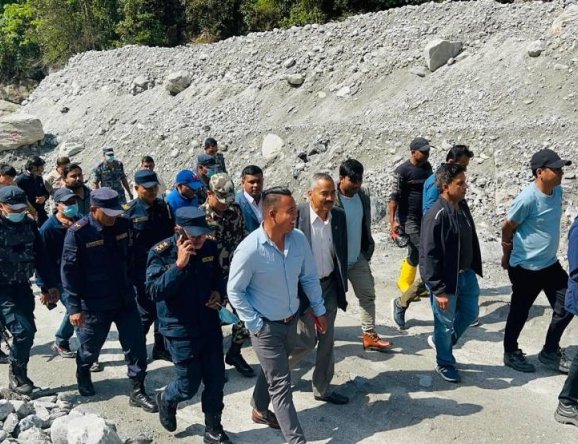 Saying that the monsoon season was about to start, Minister Chaudhary said he had come with experts and related officials for follow-up so that water supply structures would not be damaged as in the past. He said waterin the tunnel of the project would be diverted to the rivulet and the tunnel's audit gate would be shut any time as per advice of the Meteorological Forecasting Division, experts and employees.

According to Minister Chaudhary, hydraulic gates would be installed at Gate No 39, 9 and 18, and at the main audit. The hydraulic gates will arrive from India within some days. Similarly, gabion wire will be fixed in front of the Ambathan audit in order to prevent possible damage due to flood and landslide.

He instructed the bodies concerned to take measures to control the landslide near the gate by diverting the water and shifting four houses above the site which are at risk of landslide to a safer location in coordination with the local government.

He also directed the authority concerned to immediately close the gate at the tunnel and divert the water into a rivulet by taking into account the level of water flow as per the suggestion of the Meteorological Forecasting Division and experts. He believed that water from the Melamchi River could be immediately supplied to Kathmandu again after the end of the monsoon season if the project structures were protected from damage.

Minister Chaudhary also said he was ready to fulfil the justified demands of the contractor, including matters related to payments. He added that the decision regarding the social uplift budget would be made in a day or two.

He said a call for tender had been made for supplying 50 million litres of water from the Bagmati River on a daily basis as an alternative to Melamchi for the time being and the government had devised a plan to avoid shortage of water for the denizens of the capital by managing additional 50 million litres water from underground sources.

The water supply minister said a study was being conducted for supplying water from Sisneri, Thosne and Mahadevkhola rivulets reports RSS.