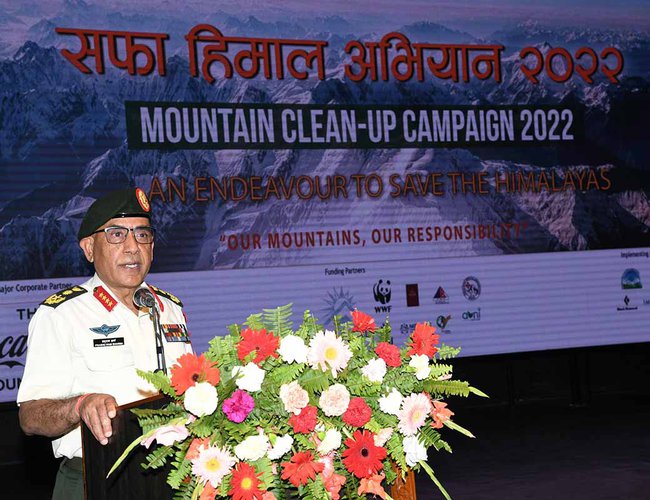 Nayaran Dhungana, Kathmandu, June 5 (RSS): The Nepali Army has collected as much as 34 tonnes of waste from four mountains under the 'Clean Mountain Campaign' this year.

The campaign that kicked off on March 5 has come to a conclusion marking the World Environment Day on Sunday.

On the occasion, the team involved in cleaning campaign handed over the flag to Chief of Army Staff (CoAS) Prabhu Ram Sharma to mark the end of the campaign for this year.

The campaign was launched in association with various non-governmental agencies and private sector and garbage was retrieved from Sagarmatha, Lhotse, Kanchenjunga and Manaslu.

Among the solid waste brought from the mountains were 7,227 kgs of biodegradable and remaining were non-biodegradable, shared the NA. Similarly, the cleaning team collected skeleton of two humans from Mt Kanchenjunga.

According to Himanshu Khadka, Director of the Campaign and Director at the National Park and Wildlife Reserve Directorate, the cleaning team included 30 NA personnel and 48 Sherpas as support staffs.

The biodegradable wastes were handed over to the concerned local levels while non-biodegradables were given to various organizations for recycle. Some waste is yet to be handed over, the NA said.

On today's event, Director General at the Department of Tourism Taranath Adhikari said that the need for a separate battalion or company of NA was felt for conservation and cleaning of the mountains.

Likewise CoAS Sharma asserted that it was the supreme duty of humans to maintain balance in environment in the face on growing environmental degradation. Stating that the 'Clean Mountain Campaign' was one of the government's efforts towards environment conservation, the CoAS said that the NA had been only playing a leading role on it.

The two-month Mountain Clean-up Campaign 2022, undertaken under the leadership of the Nepali Army and in the support of Sherpa mountaineers, formally concluded for this season on Sunday.

Organising a special flag-in ceremony at the Nepali Army Headquarters on Sunday, four clean-up teams for four separate mountains (Mt. Everest, for Mt. Kanchanjunga, for Mt. Lhotse and for Mt. Manaslu) announced the end of this season’s clean-up campaign after collecting over 33.87 tonnes of mountain garbage.

Of the total collected wastes, 26,650 kg was non-biodegradable and the rest was biodegradable. The campaign had begun on April 5, 2022.