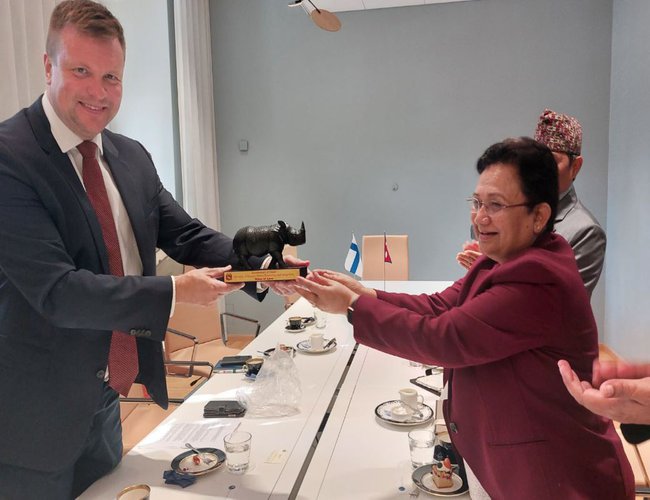 The Government of Nepal and Finnish Government have committed to working together in the areas of water resources utilisation, climate change and risk reduction of monsoon-induced natural disasters.

During a meeting between Minister for Energy, Water Resources and Irrigation Pampha Bhusal and Minister for Development Cooperation and Foreign Trade Ville Skinnari of Finland held here on Tuesday, the two sides expressed their solidarity to work with unity in issues of common concern.

Skinnari of Finland held here on Tuesday, the two sides expressed their solidarity to work with unity in issues of common concern.

On the occasion, Minister Bhusal stated that Nepal wants to establish partnership with the Finnish Government in the areas of climate change adding that Nepal has no contribution on climate change but its impacts were severe.

She also urged to further expand cooperation from the Finnish Government to Nepal on reduction risk of disasters which are occurring due to the impact of climate change.

On the occasion, she expected Finnish Government's financial assistance to build the reservoir-based mega hydropower projects including the Budhi Gandaki Hydropower Project.

Furthermore, she urged the Finnish Minister for technology transfer to develop hydrogen energy in Nepal adding that Nepal has accorded special priority for clean energy.

Likewise, Finish Minister for Development Cooperation and Foreign Trade Skinnari expressed commitment of behalf of his government to continue assistance for Nepal's social-eonomic development and minimise the impact of climate change. "Climate change is our common issue. We will support Nepal to reduce its impacts," he said.

During the meeting, officials from both the countries were present.

The Finnish Government is providing assistance to Nepal in the area of energy development, sanitation, drinking water, weather forecasting and civil aviation sectors.

Japan Government And UN-Habitat Implement The Project In Nepal, Cambodia And Sri Lanka By NEW SPOTLIGHT ONLINE 1 hour, 22 minutes ago

Incredible Opportunity To Visit Patan Durbar Square In Nepal: US Under Secretary Nuland By NEW SPOTLIGHT ONLINE 4 hours, 39 minutes ago

US Wants To Make Its Collaboration And Strong Economic Relation With Nepal: US Under-Secretary Victoria Nuland By Agencies 11 hours, 5 minutes ago