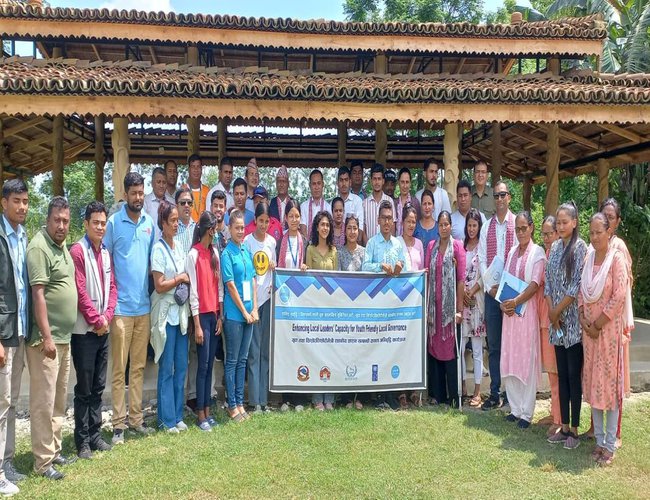 This year, NYC jointly with Jagriti Child and Youth Concern Nepal (Jcycn), and support of UNICEF and UNDP revised the YFLG Guideline, 2075 through the virtual engagement of more than 180 stakeholders and youth of various backgrounds, read a press statement issued by the NYC issued today.

According to the NYC statement, capacity-building training was imparted to representatives of the selected seven local levels where the pilot projects of the YFLG will be implemented.

Full text of the press statement:

Nepal recognizes citizens between the age group of 16 to 40 years as a youth. Realizing the need for positive and creative contribution of the youth in the overall development and progress of the nation, Nepal has established the foundation for youth rights through various National and International commitments and legal provisions like Sustainable Development Goals (2016 (2030), Constitution of Nepal, 2015, Fifteenth Plan, National Youth Policy 2072, National Youth Council Act 2072, National Youth Council Regulations 2073, Youth Vision 2025 , Ten-Year Strategic Plan, etc. and so on.

The government of Nepal National Youth Council (NYC) has initiated Youth Friendly Local Governance (YFLG) campaign to ensure the effective implementation of these provisions for the establishment of youth rights in the country.

YFLG is a strategic framework that incorporates the concerns of youths in the local governance system to operate with the active participation, involvement and cooperation of the youth.

It is highly essential to promote the YFLG concept for implementing the responsibilities and rights given to the local government by the Local Government Operation Act, 2074, the five pillars of the Youth Vision, 2025 and the Ten-year strategic plan namely; quality and vocational education, employment, entrepreneurship and skill development, health and social protection, youth mobilization and participation, and leadership development and sports and entertainment.

This year, NYC jointly with Jagriti Child and Youth Concern Nepal (Jcycn), and support of UNICEF and UNDP revised the YFLG Guideline, 2075 through the virtual engagement of more than 180 stakeholders and youth of various backgrounds.

The revised YFLG guideline provisions 7 strategies, 46 approaches, 45 indicators and 4 steps for adoption, implementation and declaration of YFLG at the local level.

They can be localized as per local need, importance and demand. In addition, a YFLG training Manual was prepared with the engagement of more than 200 youth and stakeholders for kicking off YFLG pilot program in the country.

These pilot training have kindled YFLG momentum in the selected areas, and the stakeholders have provided complete ownership and commitment to contribute to the promotion of the YFLG program realizing the contemporary need for YFLG intervention in the local governments. A support committee was formed for the continuation of the YFLG campaign, and a commitment letter was signed by the participants at the end of each of these training. A specific work plan has also been prepared for all selected seven Local Governments for further intervention on the YFLG agenda. Representatives of the National Youth Council including Mr. Ramakanta Sharma (Administrative Chief), Chanda Thapa (Under Secretary) and Rajkumari Khatri (Officer) participated in pilot training at various local governments. Bishnu Khatri, YFLG expert, Ms. Meena Sharma, GESI expert and Dipesh Ghimire, Associate Professor facilitated the training in various provinces.

Speaking at the review, reflection and way forward of the YFLG pilot program conducted on 11 August 2022 commemorating International Youth Day, 2022, the Vice-Chair of the National Youth Council Mr. Surendra Basnet said that YFLG is highly relevant in today’s context for ensuring the meaningful engagement of youth in the policy-making process. Stating that the current effort is inadequate for real change, he stressed the need of additional contribution and expressed commitment to the continuous promotion of the YFLG campaign. Similarly, UNDP Resident Representative, Ayshanie Labe emphasized the need to promote youth-friendly local governance by strengthening behavior, intergenerational solidarity, unity and interaction and expressed commitment for the promotion of YFLG on behalf of UNDP.

Usha Mishra, the deputy representative of UNICEF, said that a large investment in youth and children at the present time is essential to balance the increased number of senior citizens in the near future. Mr. Tilottam Paudel, president of Jcycn and executive member of NYC said that as the lead implementer of the YFLG campaign on behalf of CSOs, Jcycn is committed to seeking further resources and continuing the YFLG campaign as a sustainable approach to ensuring youth’s rights. Speaking on behalf of the participants of the YFLG pilot training, Ms. Rejina Gharti Magar stressed the importance of continuing of YFLG campaign in the country with the leadership and ownership of youth. The team leader of the YFLG pilot campaign, Sumikshya Khadka stressed enhancing competence, increasing creative interventions and ensuring meaningful participation for sustainable adoption of YFLG framework.

With the kick-off of the YFLG campaign against various burning issues hindering the effective development, platform and opportunities for youth, we can hope that the campaign will continue with the engagement and ownership of all the relevant stakeholders, especially youth.