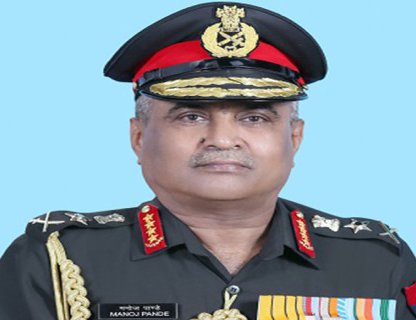 Chief of Army Staff of India, General Manoj Pande will be arriving Nepal on a five-day visit beginning from coming September 4.

This will be the first visit of an Indian Army chief to neighbouring Nepal since his appointment to the post on April 30 this year.

According to the Nepali Army, the Indian army chief is arriving at the official invitation of Chief of Army Staff (CoAS), Prabhu Ram Sharma, leading a five-member delegation.

During the five-day visit to Nepal, General Pande will attend a wreath-laying ceremony at the Tundikhel-based Monument to the Brave Soldier and observe a guard of honour to be presented him at the NA Headquarters, Bhadrakali, according to NA Directorate of Public Relations and Information.

Similarly, he is scheduled to sit for bilateral talks with CoAS Sharma, to attend a program to hand over assistance on behalf of the Indian Army to the NA, to hold interactions with the students of Army Command and Staff College and to visit the Mid Command Headquarters.

As the major highlight of the visit, President Bidya Devi Bhandari will confer the honorary title of the NA CoAS General to the Indian Army Chief Pande amidst a special ceremony.

The Indian Army Chief will hold an official meeting with Prime Minister and Minister for Defence, Sher Bahadur Deuba, during the visit, according to the Directorate. (RSS)

During the visit, the two sides are scheduled to discuss various aspects of bilateral defence cooperation including logistical support to the Nepali Army, according to official’s privy to this development.

Pande, who was appointed as the 29th Army Chief of India, will be conferred with the honorary title of Nepali Army by Nepali President Bhandari during the visit, according to Nepal Army headquarters.

Conferring the honorary rank of General on each other's Army Chiefs has remained a customary practice between Nepal and India.

In November last year, Chief of the Nepali Army Staff Prabhu Ram Sharma travelled to India at the invitation of his Indian counterpart General Pande. General Sharma was given the honorary title of Chief of the Indian Army by the former Indian President Ram Nath Kovind amid a special function at the Rashtrapati Bhawan in New Delhi.

The tradition has been followed by the two immediate neighbouring countries since 1950.

General KM Cariappa was the first Indian Army Chief who received the honorary rank of Nepali Army chief in Kathmandu in 1950.

Since then, 21 Indian Army chiefs visited Nepal, while 17 Nepali Army chiefs have visited India during the same period.

The Indian and Nepali Army chiefs have continued their engagements formally and informally for years.

Lastly on May 4, the Indian Army Chief held a video conference with Nepali counterpart Sharma with a focus on boosting bilateral defense cooperation.