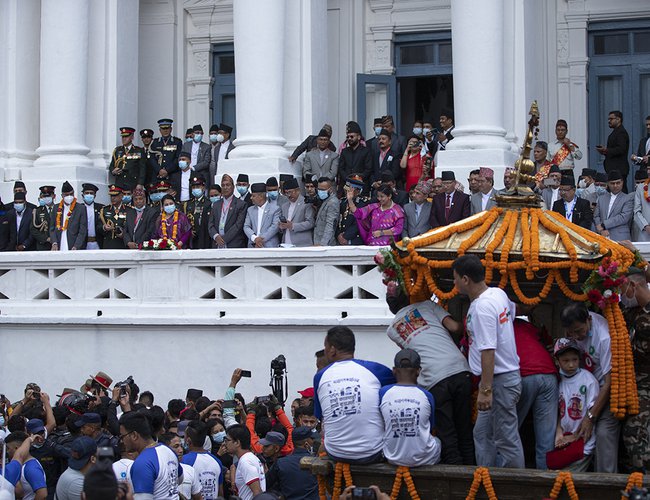 President Bidya Devi Bhandari on Friday reached the Basantapur Durbar Square in Kathmandu to observe the Indrajatra, one of the cultural festivals observed mostly in the Kathmandu Valley (Kathmandu, Lalitpur and Bhaktapur).

She also observed and allowed the chariot processions of Shree Kumari, Shree Ganesh and Shree Bhairav after worshipping at the chariots.

Others observing the festival were Prime Minister, chief of constitutional bodies, ministers, representatives of foreign diplomatic missions in Nepal and representatives from local levels.

On the occasion, the chariots—amid Lakhe (demon), Pulu Kisi (elephant) and Sawa Bhakku dances, and people wearing masks of incarnation of various deities marching—were taken through various places of Kathmandu, while local people and foreign tourists gathered and observed the processions.

Started on the Bhadra shukla dwadashi in the lunar calendar following the erection of a Lingo (wooden pole) with Indradhwaja (festoon) at Hanumandhoka after performing puja traditionally, bhadra shukla chturdarshi is the main day of the eight-day festival. Lord Bhairab is worshipped at the foot of the Lingo.

Indrajatra has been taken as a festival being celebrated following a defeat over enemies. The festival is also observed outside the Kathmandu Valley including in Dhulikhel and Dolakha. (RSS)