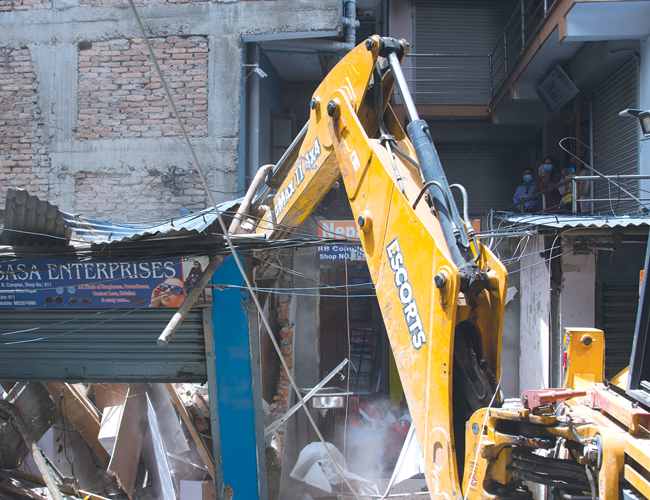 With new leadership of Mayor Balendra Shah, Kathmandu Metropolitan City (KMC) is now in full action. It has been making news headlines every day, especially after the launching of the drive to demolish structures built illegally, encroaching public land and river banks.

It has already been 27 days since the KMC started its demolition drive from New Baneshwor area on August 22 targeting the basement parking lots which the business houses were using for other commercial purposes.

On Friday, the KMC demolished the illegal structures in Baneshwor and Thapagaun.

The drive launched from Baneshwor has spread to more than 40 places -- New Road, Makhhan, Indra Chowk, Ason, Durbar Marg, Kalanki, Gongabu, Balaju, Samakhusi, Hattisar, Baluwatar, Koteshwor, Pashupatinath, Macchapokhari, New Buspark, Mhepi and others. Structures of some of the popular commercial buildings like Alfa Beta, Kathmandu Mall, Bhatbhateni, QFX Jay Nepal were also demolished. Many of these places have been left with the debris of the demolished structures.

According to the KMC Spokesperson Navin Manandhar, the metropolis had requested the building owners to clean the debris on their own. If not, the metropolis will take away the debris and the owners would be accounted for the clearance cost, he added.

While some of the city corners have been heaped with the debris, some areas have become vacant beyond people’s imagination.

Mayor Shah himself has reached even in the old and core settlements. One who grew in the city had always faced the hustle-bustle and crowd in the core of the city: Ason, Bhedasingh, Indra Chowk and Makhhan throughout the year.

People had been running business in these areas by encroaching streets, alleys and even cultural monuments for generations. These footpath businesses and encroached structures in these areas have already been removed successfully.

The metropolis did face difficulties and disputes with the locals and owners during the drive. Mayor Shah’s argument with the director of Alfa Beta Complex Dwiraj Sharma created a sensation in the media. Similarly, a shopkeeper at the RB Complex even threatened Mayor Shah of ending her own life. The situation between street vendors of Ason and the city police got tensed when the vendors showed the lease document for the shops.