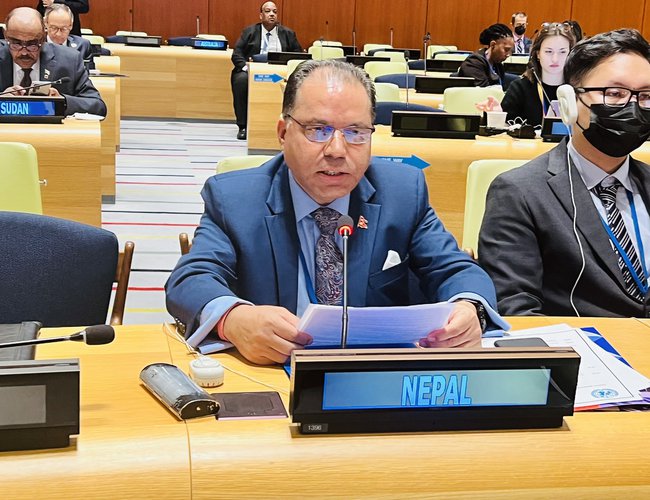 Speaking at the LLDCs Ministerial Meeting, Foreign Secretary Paudyal outlined the development challenges faced by LLDCs in the field of trade, transport and connectivity which were worsened by the pandemic, climate crisis and natural disasters. He highlighted the need of green and resilient recovery, expansion of physical and digital connectivity infrastructures, and strengthening of global cooperation for LLDCs.

He stressed on accelerating the implementation of the Vienna Programme of Action. “Since Nepal is graduating from the LDC category by 2026, building strong connectivity through resilient infrastructure is our top priority. We expect a greater support from the transit countries and our development partners towards this end”, he emphasized. The Meeting concluded by adopting a Ministerial Declaration.

Addressing the LDCs Ministerial Meeting, Foreign Secretary Mr. Paudyal underlined the challenges such as inequality, climate emergency, and Covid pandemic faced by the Least Developed Countries. He added that even after the implementation of four decadal Programmes of Action for LDCs, these countries continue to grapple with underdevelopment and poverty and are aggravated further by the pandemic.

He called for building productive capacities, boosting investment and trade, reducing poverty, and strengthening institutions to solve these problems, as endorsed by the newly adopted Doha Programme of Action for the LDCs. He emphasized on ODA, technology transfer, aid for trade and climate finance to plug the resource gaps and develop capacity in the LDCs. He also called for strong support from partners to complement Nepal’s national efforts to ensure its smooth, sustainable, and irreversible graduation. The Meeting adopted a Ministerial Declaration at its conclusion.

In the afternoon, Foreign Secretary Paudyal also attended a high-level luncheon to discuss the implementation of the Doha Programme of Action jointly organized by the State of Qatar, the host of the LDC5 Conference, Malawi, the Global Coordinator of the LDCs, and the UN-Office of the High Representative for the LDCs, LLDCs and SIDs (UN- OHRLLS).

On the sidelines today, Foreign Secretary Paudyal had bilateral meetings with Foreign Minister of Maldives Abdulla Sahid and Foreign Minister of Nicaragua, Denis Moncada Colindres. During the meeting, the two sides discussed various matters of mutual interest and cooperation at bilateral, regional, and multilateral levels.