SC's Order Not To Extend Terms Of GMR In Upper Karnali

SC's Order Not To Extend Terms Of GMR In Upper Karnali 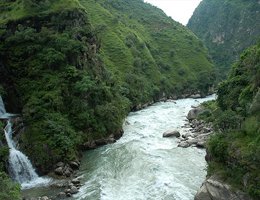 The Supreme Court issued an interim order, asking the government not to implement its decision to extend the term of Gandhi Mallikarjun Rao (GMR), an Indian promoter company of the Upper Karnali Hydropower Project. The Cabinet had decided to extend GMR's term by two years.

A single bench of SC Justice Ishwor Prasad Khatiwada issued the interim order on Thursday against the Cabinet decision of July 15 early this year. The term of the GMR had expired three years back.

The SC questioned why the Cabinet made the decision on extension of the project while it was earlier decided by the Investment Board.

The order has stated that special rights was delegated to the case as per the SC Regulations 2074 since the issue was required to be settled in a speedy manner.

The Investment Board of Nepal and GMR had signed the project development agreement seven years ago with two years term.

Later, the company was given one more year since the project did not advance as agreed in the contract.

Likewise, the Board again had given one more year for financial closure for the Indian company. Since then, no process was applied to continue the contract or maintain continuation of the contract.

Last time, the government had extended the tenure of the project based on the recommendation made by a taskforce formed under the leadership of National Planning Commission Vice-Chairman Bishownath Poudel.

Ratan Bhandari, an advocate of Nepal’s water resources and energy sector, had filed the writ petition at the SC demanding to scrap the government decision to give more time for GMR.(RSS)

16 Day Of Activism Against Gender Based Violence By NEW SPOTLIGHT ONLINE 6 hours, 1 minute ago