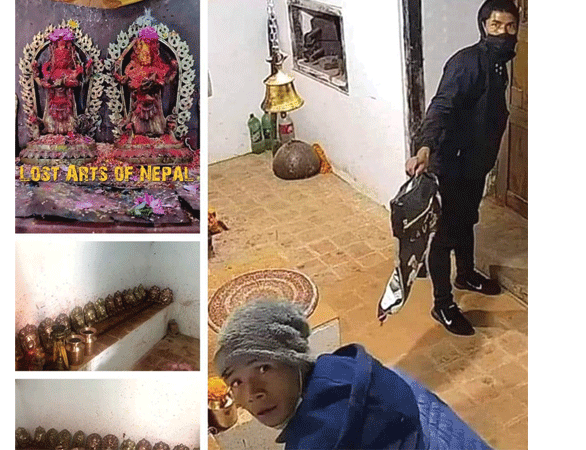 The sculptures and mask of Balkumari (Jayala Kumari), a temple in Lele in Godawari Municipality- 5, Lalitpur, were stolen on Wednesday night.

Of the 33 different idols, 25 sculptures were stolen from the temple.

The priest informed the ward chairman about the incident when he reached the temple Thursday morning for regular worship. According to ward chairman Milan Silwal, the stolen sculptures were made from copper.

A preliminary investigation of police shows that the sculptures were stolen around 1.30pm on Wednesday night.

Two thieves involved were seen in the CCTV footage clearly. Nepal police is searching for the culprits, according to Jawalakhel Police station.

Meanwhile, a sculpture of Buddha Shakyamuni, stolen in 1974 from a Buddhist Monastery in Banepa, Kavre, has been restored back to its original temple after 48 years.

The sculpture was stolen in 1974 from Bahitole of Banepa Municiplaity-8. It was found at Tribhuvan International Airport in 1978 and since has been kept safely at National Museum of Chhauni, said Narendra Raj Shrestha, president of Bahi Bha Gyanmala Bhajan Kha:.

“The original temple was not safe to restore the sculpture in the past. Also, no effort was made to restore it. The Department of Archaeology has recently reconstructed the temple at a cost of Rs. 10 million after it was damaged by the 2015 earthquake.

In the joint collaboration of the Department of Archaeology, Municipality and Bhajan Kha:, the sculpture was restored in its origin temple, Shrestha said.

Similarly, the 15th century bronze image of Buddha Shakyamuni, which was stolen on April 10, 2016, was withdrawn from auction in China Guardian Auctions Beijing, China after Lost Arts of Nepal, a Facebook page that tracks the whereabouts of Nepal’s stolen artefacts, released the provenance information.

Days ago the image was located in China Guardian Auctions. The image was stolen from Gakar Monastery, Dho Tarap, Dolpo.