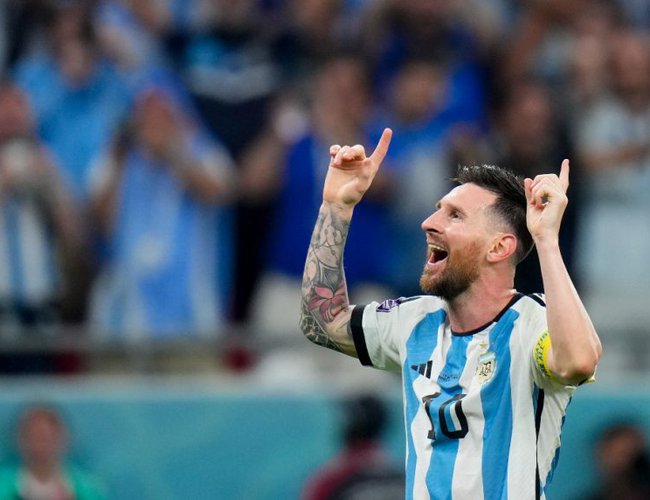 Lionel Messi was pushed into the middle of a joyous post-match huddle as Argentina’s players jumped up and down to celebrate reaching the World Cup quarterfinals.

Messi delivered again for his country, marking the 1,000th game of his era-defining career with his first goal in the knockout stage of a World Cup to lead Argentina to a 2-1 win over Australia on Saturday.

This was not the walkover most were expecting against the unheralded Australians, though.

At the final whistle, Argentina was just as grateful for its goalkeeper as the No. 10 with magic in his boots.

Emi Martinez came up with a sprawling save in the last seconds of an increasingly anxious match to prevent the need for extra time and the potential of another shock in a World Cup full of them.

“That is the World Cup for you,” Messi said. “All the matches are difficult and what’s important is that you win.”

With a flourish of his famous left foot in the 35th minute, Messi put Argentina ahead with his third goal at this year's tournament and ninth in total at the World Cup — one more than Diego Maradona.

Julián Álvarez pounced on a heavy touch by Australia goalkeeper Mathew Ryan to tap into an empty net for the second goal, but this was no cruise to a quarterfinal meeting with the Netherlands.

Players of the Netherlands celebrate their side's second goal by Daley Blind during the World Cup round of 16 soccer match between the Netherlands and the United States, at the Khalifa International Stadium in Doha, Qatar, Saturday, Dec. 3, 2022. (Martin Meissner/AP)

Christian Pulisic covered his face as he walked off. Tyler Adams, Weston McKennie and Kellyn Acosta gathered for a group hug. Tim Weah, DeAndre Yedlin and Sean Johnson sat on the field in a small circle with their cleats off.

“It hurts after a tough loss like that when we feel like we could have had more,” Pulisic said, managing a voice only just above a whisper. “We don't want to feel like this again.”

The United States' return to the World Cup ended with a 3-1 loss to the Netherlands on Saturday in the round of 16. While the Oranje extended their unbeaten streak to 19 games and advanced to a quarterfinal with Argentina, the Americans contemplated how far they came and how short they fell.

Defensive lapses gave the Dutch a treat as Memphis Depay scored in the 10th minute and Daley Blind in first-half stoppage time.

U.S. hope revived when Pulisic's cross hit the trailing foot of second-half substitute Haji Wright and popped over goalkeeper Andries Noppert and into the net in the 76th. But Denzel Dumfries, named after actor Denzel Washington, scored on a volley in the 81st after assisting on the first two goals.

“The American public should be optimistic,” said Gregg Berhalter, the first person to play for and coach the U.S. team at a World Cup. “When you look at the way we wanted to play and did play, it should be positive.”