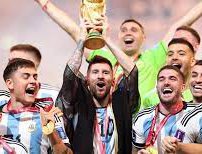 Argentina has won the men's soccer World Cup in Qatar by defeating France in the white-knuckle penalty shootout of the final. It was the South American team's first title in 36 years, and its third overall.

The two powerhouses clashed at Lusail stadium on Sunday. Argentina is third in the FIFA rankings while defending champion France is fourth.

Argentina's Lionel Messi netted the match opener in the 23rd minute by converting a penalty kick. It added a goal when Angel Di Maria fired a shot on a cross from Alexis Mac Allister.

France halved the deficit at the 80th minute when Kylian Mbappe narrowly steered the penalty in off the goalkeeper's hands.

The European side finally caught up just one minute later when Mbappe took a pass in the penalty area and volleyed it to the back of the net.

The nail-biter went into extra time.

Argentina bagged a much-awaited goal early in the second extra period when Messi pushed the ball over the goal line after Lautaro Martinez's shot was parried by the keeper.

But France tied the score again in the 118th minute when Mbappe buried another penalty to accomplish his hat trick. It was the striker's eighth goal in the tournament, bringing him to the top of the scoring ranking.

The extra periods ended up in a 3-3 draw, leaving the fate of the match to a penalty shootout.

Mbappe and Messi both scored as the first kickers for their respective teams. But two subsequent French players failed to score back to back.

This was Argentina's third World Cup title. It had previously won the quadrennial competition in 1978 and 1986.

Brazil has five World Cup titles, the most of all sides. It is followed by Germany and Italy at four.

Messi participated in a fifth straight World Cup. His start in the final made him the player with the most match appearances in the tournament's history at 26. The previous record of 25 was established by Germany's Lothar Matthaus.

The 2022 World Cup started terribly for Argentina. The shocking opening loss to Saudi Arabia - and the whispers began immediately.

The statistics were clear. Losing the first game in group play makes it almost impossible to advance to the knockout round. Not only would Argentina advance, it won the group and kept winning and never stopped.

Now, with a 3-3 (4-2 penalty kick shootout) victory over defending champion France, Lionel Messi can call himself a World Cup champion in what was probably his final World Cup match. It's Argentina's third title and those early whispers have been replaced by tears and cheers.

Argentina started the match against France with aggressiveness and relentless attacks. The French, who looked so dominant all tournament, struggled to find their rhythm, cohesion and energy it had showcased in Qatar.

The Argentina attack paid off midway through the first half. Argentina forward Ángel Di María scooted past France's Ousmane Dembélé who tripped him in the box and won a penalty kick.

There was no doubt who would take it. Lionel Messi, playing in his 26th World Cup game (the most ever in the men's tournament), walked up to the penalty spot, 12 yards from the French keeper. With a deep breath and calm strike, he powered it low and to the right. 1-0.

With the goal, Messi became the first man to score in every game of a World Cup knockout round in a single tournament (round of 16, quarterfinal, semifinal and final).

The South Americans were not done. In the 36th minute, Argentina managed to dissect the French defense across midfield. With just two crisp passes, it was Di María creating the chances, again, streaking into the box with a shot lifted above diving French keeper Hugo Lloris. 2-0.

After the goal, Di María trotted back to the Argentina side of the field, wiping away tears.

France looked out of sorts. Coach Didier Deschamps did the unthinkable - replaced two of his starters in the first half: Dembélé (whose foul led to the first goal) and all-time French scoring leader Olivier Giroud.

At halftime, defending-champion France looked shocked. The French star, Kylian Mbappé, had little to show in the first 45-minutes of the match.

Mbappé shined during the 2018 World Cup as a 19-year-old. The comparisons were many to another teenager with a stellar soccer pedigree: Pelé. (In 2018, Mbappé became the first teenager to score at a World Cup final since Pelé in 1958). At the 2022 tournament, Mbappé picked up where he left off.

He set another World Cup record — surpassing Pelé's record for a player under 24 with his 12 total goals. Mbappé scored eight goals in Qatar - entering the final tied with Messi with the overall goal lead. But against Argentina, Mbappé had been largely silenced. Which is saying something. His first recorded shot came in the 71st minute.

The nearly 89,000 people inside Lusail Stadium were overwhelmingly for Argentina - most wearing the team's trademark white and sky blue uniform. It was electric. They cheered every touch, every pass and every shot.

But in the 80th minute, Mbappé sliced the Argentina lead in half with a penalty shot to make it 2-1. All match long, France had been muted. Quiet. Unsure. But then the game's energy changed as France showed some life.

Then, 93 seconds later, unbelievably Mbappé did it again. He evened the score with a blistering right-footed shot beyond the Argentinian keeper Emiliano Martínez. 2-2.

Kylian Mbappe of France celebrates after scoring the team's second goal during the FIFA World Cup Qatar 2022 Final match between Argentina and France at Lusail Stadium on December 18, 2022 in Lusail City, Qatar.

This is the French team everyone expected to see in the championship. It was finally Messi vs. Mbappé. The 35-year-old, one of the finest to ever play the game, against the 23-year-old, who continues to add to his impressive soccer pedigree.

The teams played nine more minutes in regulation - and eight more in stoppage time. Neither would score - forcing 30-minutes of extra time.

Argentina had been here before. It lost in the 2014 World Cup final when Germany scored in extra time and won 1-0.

This time it would be Argentina which scored in extra time. And was there ever any doubt who would knock it in? Lionel Messi, of course. The ball ricocheting in front of the French goal and Messi booting it in. In the 109th minute. His second goal of the evening. 3-2.

Of course that score wouldn't hold. A handling call inside the Argentine box led to another penalty kick attempt for France. And of course it would be Mbappé. And of course he scored in the 118th minute. A hat trick for the young French star. 3-3.

Both sides battled in the waning minutes. But it would come down to a penalty kick shootout to end what will likely go down as the best World Cup final in history.

Argentina got the early advantage. After penalty kicks scored by Mbappé and Messi, the Argentina keeper stopped the attempt by France's Kingsley Coman. Then, Aurélien Tchouaméni missed his attempt. It came down to Argentina's Gonzalo Montiel who scored the winning penalty kick. Tears and hugs and smiles for Messi and all of Argentina, really.

It had not been since 1986 when Argentina last won a World Cup carried by Diego Maradona - the man whose shadow has loomed large over Messi.

The 2022 World Cup belongs to Argentina. It's Argentina's third title and the first for Lionel Messi. The first time he can call himself a World Cup champion. It was his last chance. Now his resume is full.

CAN Lifts Suspension Of Leg-spinner Lamichhane By NEW SPOTLIGHT ONLINE 23 hours, 22 minutes ago