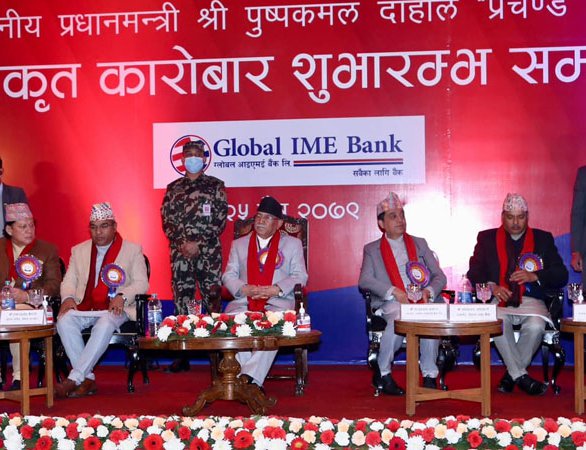 During a launching ceremony of the integrated transactions of the Global IME and the Bank of Kathmandu today, the Prime Minister said the foundation for financial inclusion could be prepared and consolidated by ensuring easy access of entire communities to banking services.

The Prime Minister on the occasion stressed on the need of results-oriented delivery to address existing issues in economy.

“The very first meeting of the Council of Ministers of the incumbent government decided to make efforts for balanced implementation of the financial and monetary policies to make the economy vibrant and to cooperate and collaborate with the private sector to seek solutions to the current economic issues collectively,” the Prime Minister said.

He was of the opinion that it may be easier for banks and financial institutions to manage resources for big projects and to enhance organisational efficiency with the enforcement of a merger. “More, the merger would contribute to discouraging unhealthy competition in the relevant sector. But our concern should be for ensuring unhindered excess of people to quality services,” he asserted.

Stating that the banking sector had its significant role to making remittance transactions reliable and safe, the Prime Minister echoed the need of exploring ways for financial innovations, of promoting people’s financial accessible, literacy and increasing self-employment opportunities for them.

Stating that there had been confusion and problems in the private sector due to economic problems lately, Chief Secretary Shanker Das Bairagi said the government was serious and would take effective steps in increasing their morale. "There have been positive indications in the country's economy. There is no point wherein the private sector should be in fear. The government prioritizes them."

Governor of the Nepal Rastra Bank (NRB) Maha Prasad Adhikari said the merger process was pursued following increasing unhealthy competition and operative expenditures of financial institutions. This would have significant reforms in the banking sector, he expressed the hope.

"There were problems, including more operating cost and increased unhealthy competition when there are many institutions. The BFIs will be healthier and secure when their number decreases," Governor Adhikari said. He urged the banks and financial institutions to be focused on self-regulation and increasing the national production by keeping the smaller loans also in priority.

President of the Federation of Nepalese Chambers of Commerce and Industry (FNCCI), Shekhar Golchha said the government and the NRB should pay attention mainly to three topics for improving the deteriorating national economy.

"First, the public expenditure should be increased; second, the monetary policy should not be only tight but also flexible considering the business risks on the investments; and third, an investment-friendly environment should be created for the private sector," he maintained.

According to him, positive impact in the economy will not be seen unless the government ramped up the development expenditure. Stating that banks and financial institutions are the backbone of the economy, Golchha said the profit of banks should also be seen, linking it with their investments.

Confederation of Nepalese Industries (CNI) president Bishnu Kumar Agrawal said the private sector's present expectation from the government and the Nepal Rastra Bank is a decrease in the interest rate and ease of liquidity. 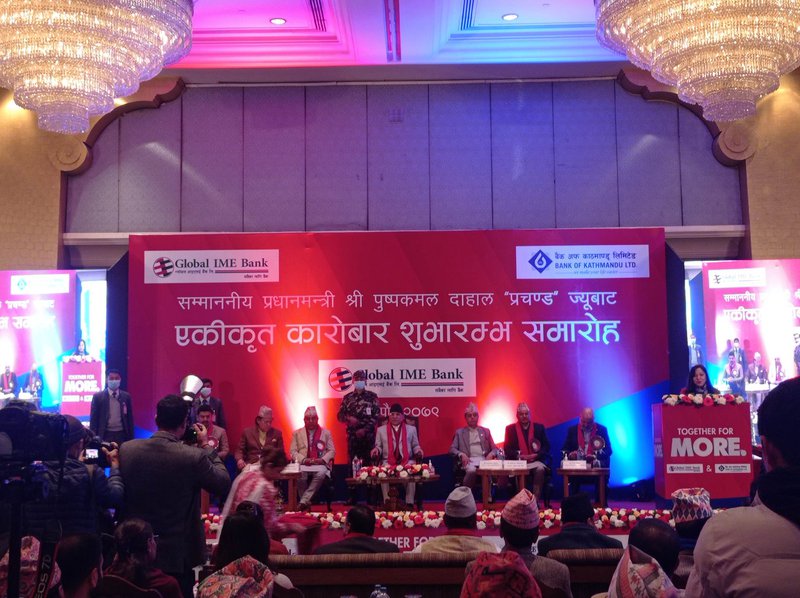 "To be a large bank entailed a bigger responsibility as well. It would be easier for the industrialists and businessmen if the interest rate could be lowered now. Initiatives should be made for investing in the productive sectors when the liquidity is adequate," he said. The CNI president added that it would contribute to national capital formation and the government's achieving the targeted revenue when the BFIs increase investment in the productive sectors.

In the inauguration of the integrated transactions, Global IME Bank's Chairman Chandra Prasad Dhakal said the Global IME has succeeded in becoming the largest bank in the country by merging and acquiring 21 various banks and financial institutions so far with the objective of bringing constructive and qualitative change in the BFI sector.

"This institution has been formed with the merger so far of five commercial and 10 development banks and six financial institutions. Global Bank has now become Nepal's biggest bank in terms of most financial indicators as capital, deposits, loans and branch network," he said.

With the beginning of unified transaction with Bank of Kathmandu, the Global IME Bank has the total capital fund of Rs 57 billion, the total deposit of Rs 410 billion, the total loans of Rs 400 billion, total assets of Rs 500 billion and 1,100 branches. The Bank stated that it also has three foreign contact offices, besides its branches in all the districts within the country. (RSS)

MD GHISING Leakage To Single Digit By A Correspondent 3 days, 8 hours ago

NEPALESE ECONOMY Growth 5 Percent By A Correspondent 4 days, 9 hours ago