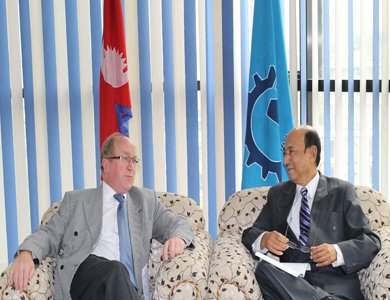 British Ambassador to Nepal Andrew James Sparkes and president of Confederation of Nepali Industries (CNI) Narendra Kumar Basnyat discussed how to increase the bilateral trade and business between the two countries.

According to a press release issued by CNI, while welcoming British ambassador Sparkes in CNI's office, president Basnyat expressed the hope that the bilateral trade between Nepal and United Kingdom will be improved during the tenure of ambassador Sparke.

"The time has now come to focus the two centuries old relations between Nepal and England in business and trade sector," said Basnyat.

British ambassador Sparkes said that Nepal's economic development and improvement of business environment is the priority of his government.

During the meeting with British ambassador, other office barriers of CNI also presented.

NIBL Heritage Conservation Pioneer By A Correspondent 3 weeks, 1 day ago

ADB New President By A Correspondent 3 weeks, 1 day ago