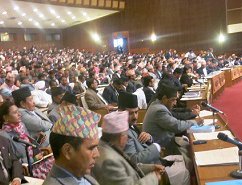 Three years after it erupted into the global political stage with what later turned out to be harbinger of a mind-boggling Arab Spring, Tunisia has got a new constitution.  Even as upbeat mood prevailed across the tiny Arab nation over the "progressive statute",  one of its South Asian counterparts began a second search for what has so far proved the elusive law of the land.

The constituent assembly meeting has started with high hopes so has the session of the legislative parliament. But the hopes have at best been cautious.

The election of the Nepali Congress president Sushil Koirala as the leader of the parliamentary party as well in the newly constituted constituent assembly has cleared the way for him to don the mantle he had shunned thus far.

Barring the unforeseen, the leader of the largest party in the 601-member body is now certain to head a coalition government  that will seek to give the country its first republican constitution within a year as per the electoral promises of  the major parties.

All major parties are however not coming together to form a consensus government as called by the president Ram  Baran Yadav.  As much was predictably clear  in the all-party meeting called by the Nepali Congress.

Following the declaration of the third and fourth largest parties of divergent political colours --  the republican UCPN-Maoist  and the "royalist" Rastriya Prajatantra Party-Nepal -- to sit in the opposition, the best Koirala can expect is to put in place a broader coalition.

Whether this coalition can deliver the long-awaited constitution within a year is something not many are sure of.

The reason: the  intra-party and inter-party trust deficit. The trust deficit is so deep that it could disrupt the normal political process anytime.

It is pronounced more in sharing the pie of power than in what is to be incorporated in the new constitution.

The tell-tale sign did appear soon after the election results of the CA began to pour  in. It was capped by the drama seen during the election of the Nepali Congress parliamentary party.

If the second largest party, the UML,  jumped into hard political bargaining with one eye on the chair of the president and another on plum portfolios in the future coalition to be led by Koirala, the latter faces no less challenge from the man he narrowly defeated in the elections of the parliamentary party -- Sher Bahadur Deuba. Yes, the UML does not seem in a mood to relent.  If it keeps unrelenting, the NC could find it too tough to run the government which the Maoists would like to cash in on.

Koirala faces no less challenge from within. Having commanded the support of nearly half of the parliamentary party members,  Deuba showed his intent by refusing to instantly congratulate his rival. He did it on phone a few hours later was enough to show his dissent  over what he sees as "a conspiratorial defeat".

Grapevine has it that Deuba has begun the countdown of the government even before it  has been formed.

Deep internal divisions mar the UML and the Maoists as well. The UML is a divided house with the incumbent chairman Jhalnath Khanal and the two chairman-aspirants in the upcoming general convention, Madhav Kumar Nepal and K.P.Oli, jostling for a position of power and convenience at the cost of each other.

As for the Maoist party, it has just survived a major internal disaster after a disaster at the national hustings. Pushpa Kamal Dahal and Baburam Bhattarai may have patched up for now, but they will surely be looking for an opportune time to strike against each other.

This will most likely affect the process of making and breaking the government.

The internal wrangling thus has the making of a perfect spoiler as the country begins the process of delivering the constitution under the second constituent  assembly. Nepal is the only country in the world to hold elections twice for the CA. If the major parties failed to bridge the inter-party and intra-party deficit especially over sharing the power,  the country could well be on the road to yet another record.