POLITICS: All Is Not Well

'An ailing PM and an ailing PM-in-waiting . And we're still asking what ails our country?' 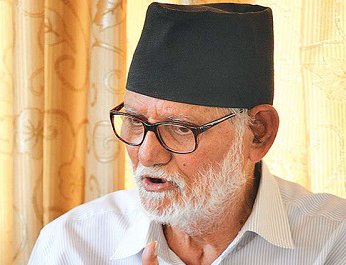 Prime Minister Sushil Koirala is back home from New York after the treatment of lung cancer that he had been diagnosed to have been suffering from. On return to Nepal after more than a month he was quick to claim that some of the long-pending important decisions will now no longer have to wait.

The nomination of the 26 members to the Constituent Assembly, appointment of ambassadors, promotion of the deputy inspectors general (DIG) of police and lately filling the vacancies in a number of government ministries following the retirement of secretaries are at top of his to-do list.

With an ailing PM at the helm, these and many other such decisions had taken a back seat. The stalled appointments and decision makings are examples of how the politics of the country has been paralyzed. Not surprisingly, the government has drawn flaks not only from the opposition but from within the ruling parties as well for what the critics call utterly sluggish pace.

Despite the prime minister' assertion on return home after a month-long absence to expedite the government, there are doubts. The reason: the chief of the key coalition partner, who is widely believed to be a PM-in-waiting,  is in no good shape either. In fact, the newly elected chairman of the United Marxist Leninist (UML), K.P.Oli, has himself said that he may not live long. Days after his emotional address to office-bearers and the central committee members  elected at the just-concluded general convention, Oli left for Singapore for medical treatment.  He flew out the same day Koirala flew in.  That two key  leaders have to be frequently out at one point  or the other bodes ill for the state of affairs.

Well, had a mechanism been in place to delegate their authority to the immediate subordinates, it would not have become a big issue as such. But lack of the trust needed between the two key coalition partners has come in the way of Koirala delegating authority to deputy prime minister Bamdev Gautam who happens to be the deputy to Oli in the party.  It's not clear yet, if Oli has also authorised Gautam to take crucial government decisions on the party's behalf.  The resultant indecision has also affected the constitution-making process even as the committees concerned at the constituent assembly claim to have made some progress.

Even as the two governing parties and the governance suffer from their ailing chiefs' poor health, the opposition parties have begun flex their muscles. The main opposition Maoists have ganged up with the Madhesi parties and a number of small parties for cornering the government in parliament and heating up the street.

No wonder, as a seasoned blogger Maila Baje wrote in his latest piece: An ailing PM and an ailing PM-in-waiting . And we're still asking what ails our country?