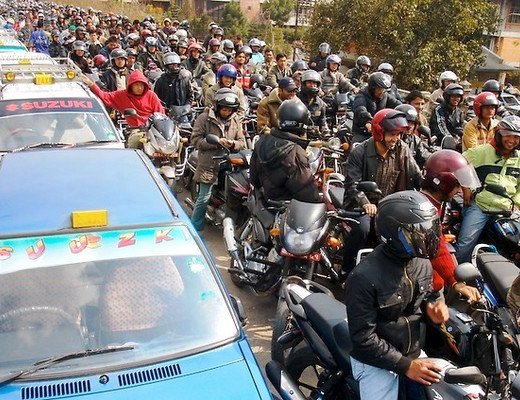 What must it feel like to be one of those countries who is in the position to give? And what must it feel like to be in a position to take? What did India experience to be one of the first countries that brought aid to Nepal right after the earthquake hit? And what is India experiencing now, to be able to stop essential supplies coming to a landlocked country? I, as a Nepali, would not know. How would I? It is a sad truth, but I await for what I can receive from my neighboring country, sometimes with gratitude at it helping us, sometimes with frustration at its capability that surpasses that of my country. And when I do not receive, I look across the border with eyes that are hopeful, teary, and angry. I attempt to free myself from the relentless dependence by attempting to counteract my neighbor’s power. I am on the streets ‘proving’ something – that my neighboring country does not have power over me or my fellow people. And India sits there, at its relatively high and mighty throne, and smiles at what appears to be mere tantrums.

Without attempting to be judgmental, I try to simply observe the power dynamics between a powerful and not so powerful country in a globalized system. According to the sociologist, Immanuel Wallerstein’s classifications, Nepal is a periphery country and India a semi-core country. The globalized system has been set up in such a way that the periphery countries are dependent on core countries for essential goods. I cannot, however, simply observe. I am judgmental of my own people, for reasons which is a separate topic for discussion. Moreover, I am judgmental of India’s forced indifference and naivety at Nepal’s economic situation.

Nepal’s aspirations to build its economic resilience after the earthquake have been thwarted by the recent demonstrations in the Terai and the subsequent ‘unofficial blockade’ in the Nepal-India border. It was expected that the current fiscal year would see an economic growth of 6 percent. However, the recent turn of events makes this prediction unlikely to come true. If the current situation in the Terai prevails, the increase is expected to be limited to a mere 3 percent, which was similar to that of last fiscal year; a result of the earthquake. Already, reports have shown that the impact of the ‘unofficial blockade’ is more severe than that of the earthquake. While the impact of the earthquake was calculated to be 52 billion NPR, the prolonged current crisis compounded by the uncertainty regarding its end has made economic predictions and subsequent planning very difficult. Moreover, it will come as no surprise if Nepal undergoes severe stagflation. As a result of the current economic condition, the dollar is likely to be more expensive within the country. The economic growth rate is already slow. Shortage of fuel has already started hitting the job market; the business sector is more likely to bear the brunt, thus increasing the chances of unemployment.

This is the current economic situation of Nepal. However, a recent article in the Times of India has omitted all these information, and portrays Nepal as one country that ‘knows how to cope’. The picture attached in the article shows a huge line in front of a petrol station and people squeezed between each other and waiting in line for hours to buy petrol. The article claims we know how to cope because we are riding our bikes to work, coordinating carpools on Facebook, and offering lifts to strangers and while doing so we see the smiles in other people’s faces and feel satisfied. While describing all the manners in which we are coping with the current situation, they have omitted very crucial information – the earthquake and the ‘unofficial blockade’ has attenuated our ability to cope. What is the guarantee that, if the situation continues, we will not exhaust all our coping mechanisms, soon or in the near future?

What is surprising is that the Indian establishment blames the current situation on our leaders and the chaotic situation in Terai. We too do not want to be naïve; we have to acknowledge our role in fueling this entire situation. However, India appears to direct the blame on us and give up on solving the situation. It appears to be indifferent to the impact of the situation on its huge market that is Nepal. Can India afford to prolong the situation and slowly but surely lose Nepal as a market? Or, it is confident that our dependency on it is forever secured and it can exercise its power on us in whatever way it wants? Thus, we cannot help being judgmental of its opaque strategies, when it was just last year that Modi visited Nepal and claimed the maintenance of a friendly economic relation between the two nations.

I agree that being judgmental does not help. The other option and that which I, a Nepali, would rather adopt, is not to give up on our unity. If in situations such as these, when we have to juxtapose our power to that of India, it is only our unity that may prevent our economy from deteriorating.

ILO: More Than One In Six Young People Out Of Work Due To COVID-19 By NEW SPOTLIGHT ONLINE 10 hours, 47 minutes ago

FAO Warns Multiple Impact Of Viruses, Plagues And Economic Damage Will Fuel Hunger In Asia And the Pacific By NEW SPOTLIGHT ONLINE 3 days, 1 hour ago