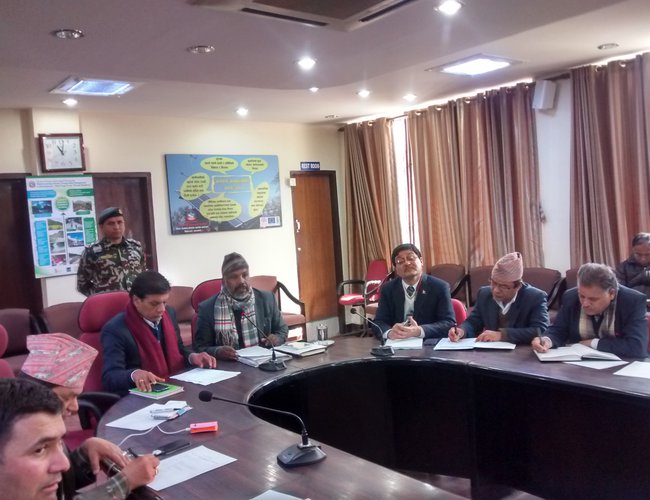 As COP 21 came out with a historic deal for the global community to reduce the impact of climate change, it has increased the pressure on countries like Nepal on what to do and how to implement the deal benefiting the country.

Almost a month after the Nepali team took part in the program, Ministry of Population and Environment has called a meeting of all stakeholders to discuss on UNFCCC COP 21 Climate deal and the future course of action to implement it.

Chaired by Minister of Population and Environment Bishwendra Paswan, the meeting brought senior government officials and media persons who had participated in the Paris Conference to share their views on the climate deal.

“Nepali team is proud for having shown its presence strongly in Paris. By riding bicycle in Paris, the Nepalese delegation, including MPs, and I tried to draw the attention of the global community to the agenda of mountain countries like Nepal,” said Minister Paswan. “I rode the bicycle in the street of Paris with members of parliament and other senior officials. We received a very warm welcome,” said Minister Paswan. “We will show our commitment to the deal by hosting an international summit of mountain countries in the coming months.”

Secretary of the Ministry Vijaya Kumar Mallik said that Nepal government is committed to implement the deal. “We have already started the process of its ratification,” said Mallik.

Presenting the climate scenario and highlighting the importance of Paris Deal to Nepal, joint secretary and head of climate Change division of the Ministry Ram Prasad Lamsal said that Paris Deal is a historic achievement and the LDC and mountain countries like Nepal can benefit a lot from it.

“Ás a country highly vulnerable to climate change, mountainous Nepal will get to benefit from the deal,” said Lamsal.

With the signing of the Paris climate deal, a debate has already started on how the agreement can benefit Nepal. The function was organized by Ministry of Population and Environment with technical support from Prakriti Resources Center (PRC) and Karnali Integrated Rural Development and Research Center (KIRDARC).

In the consultation program titled 'Paris Climate Agreement: How can Nepal Benefit?', joint secretary Ram Prasad Lamsal said that the small mountainous countries like Nepal can benefit from the deal as it has made some aspects of climate change as legally binding. “We are happy to note that the deal agreed on temperature close to the demand of LDCs at 1.5 degree Celsius,” said Lamsal.

President of KIRDRC Min Bahadur Shahi said the government and civil society organizations needs to go together to get the benefits from the Paris Deal. “As a mountainous country, Nepal is very vulnerable to climate change,” said Shahi. “Karnali zone is more vulnerable to this as it is changing the livelihood of people.”

The objective of the program is to discuss the Paris Outcome and how Nepal can benefit from the achievements of COP21, Paris.