Tug Of War In The Indian Ocean

Maldives is not new to political turmoil. It has seen a three decade long repressive authoritarian rule, a coup attempt, assassination attempt against its leader and huge anti-government protests. 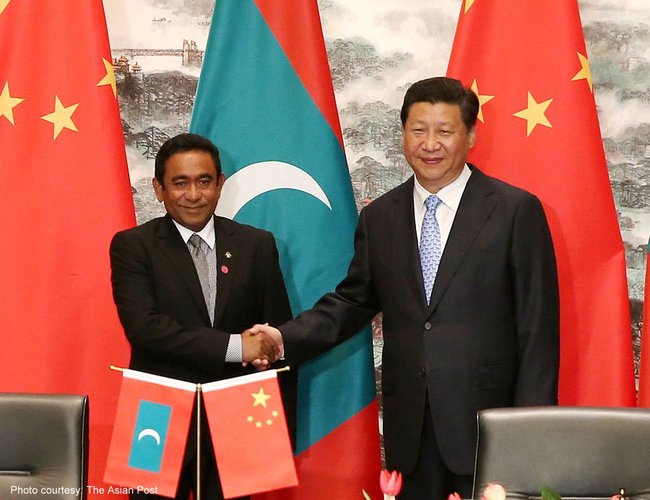 The holiday paradise and the picturesque archipelago of the Indian Ocean, the Maldives, is burning these days.

Earlier this week the Maldives government declared a 15-day state of emergency after political crisis deepened amid an increasingly bitter standoff between  president Abdulla Yameen and the Supreme Court. The declaration of state of emergency came after the Supreme Court ordered the government to release several imprisoned opposition lawmakers ruling that their trials were politically motivated. Not happy with the court orders, Yameen declared a state of emergency and made key arrests including that of the Chief Justice as well as former strongman and his half brother-turned-foe, Maumoon Abdul Gayoom.

Maldives is not new to political turmoil. It has seen a three decade long repressive authoritarian rule, a coup attempt, assassination attempt against its leader and huge anti-government protests. The ongoing crisis is nothing new; it is simply a culmination of the rivalry which started out in 2012 between the current president Yameen and former president and now exiled Mohammad Nasheed.

But the upheaval in Maldives is not just a result of in-fighting between two political rivals. It is the result of a tug of war between two arch-rivals, India and China.

Traditionally, the archipelago of 1,200 islands has been firmly in New Delhi’s sphere of influence with India even intervening militarily in 1988 to ‘foil’ a coup. It helped former president Gayoom keep power for three decades and following democratic elections in 2008, aided the new president Mohammad Nasheed. The two countries have signed numerous trade deals and Male relied heavily on New Delhi for support. But Nasheed was ‘forcefully’ asked to resign in 2012 following protests by opposition. That’s when New Delhi slowly started losing grip over Male.

Tired over India’s constant interference in its politics, Male moved increasingly closer to Beijing under new president Yameen. Ever since then, the relationship between Maldives and China has made great strides. China has become Maldives’ primary source of tourists and has given a huge boost to the economy. Beijing has invested hundreds of millions of dollars in an airport expansion, housing development and other mega projects. China also sees the Maldives as a crucial part of the Belt and Road Initiative (BRI). The two countries have also signed a historical Free Trade Agreement (FTA) in a direct challenge to Maldives and India’s 1981 trade agreements. In an unprecedented move, Chinese warships visited the archipelago last year against India’s vehement protests.

China’s aggressive move in Maldives did attract some counter response from India. After realizing that Male was moving swiftly towards Beijing, New Delhi welcomed president Yameen with a defense cooperation pact and a host of other agreements in 2016 hoping to wean him away from China. But it appeared that Male was so distrustful of New Delhi that it decided to sign the FTA with Beijing a year later signalling that it had decided to side with Xi Jingping rather than Modi.

As the current crisis outplays, India hasn’t said how it will respond. But it is pretty sure that India sees the current crisis a chance to fight back for influence. But the task is not easy anymore. With huge stakes, Beijing will not give up easily. After exiled former president Nasheed slammed China and alleged that it had ‘grabbed’ Maldives’ islands, Beijing strongly protested. Nasheed had even gone to the extent of asking India ‘to intervene militarily’ to solve the current situation. On the other hand, an editorial in the Chinese state run Global Times has already stated that ‘if India one-sidedly sends troops to the Maldives, China will take action to stop New Delhi’.

New Delhi should understand that times have changed and it is not dealing with the Maldives of Gayoom era. Rather than making any hasty move and display its ‘Big Brother attitude’ which will further alienate it from its already unhappy neighbours, it should be conciliatory and agree to compromise and share its influence jointly with China over the island nation.

US: Troops In Afghanistan To Withdraw By September 11 By Agencies 7 hours, 54 minutes ago

May His Soul Rest In Peace’: World Reacts To Prince Philip Death By Agencies 4 days, 7 hours ago