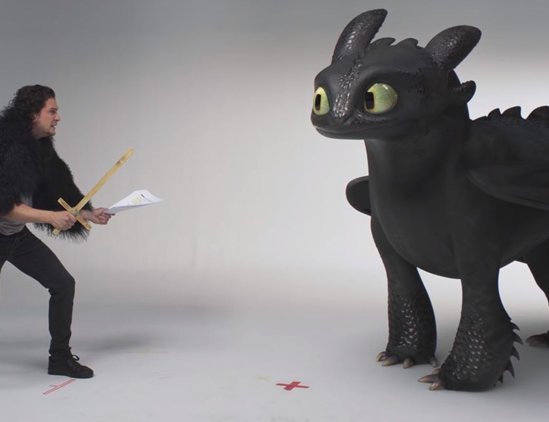 A hilarious How to Train Your Dragon: The Hidden World promo has been released. It shows Kit Harington auditioning with Toothless. Harington, who voiced the dragon trapper Eret in How to Train Your Dragon 2, makes fun of his Game of Thrones character, Jon Snow, quite a bit in the video. Kit will reprise the role in the third film of the franchise.

The video promo looks very expensive as far as promos go, since a full-sized Toothless was rendered just for it and there are a few special effects too as the dragon does goofy stuff.

Jon Snow may have been proved to be a Targaryen, but it appears he still does not have a way with dragons. Or Hiccup’s beloved Night Fury dragon, Toothless, is too loyal to its owner.

The audition begins with Kit mouthing lines and Toothless knocking him down, after which Kit asks whether it was in the script. Kit tries to be as faithful to what he is supposed to do, but Toothless simply refuses to cooperate.

At one point, he chews through a power line, cutting off electricity in the studio. One of the funniest moments of the clip comes when Toothless spits out a gob of saliva on Kit’s face, and somebody behind the camera says, “Get him cleaned up, please.” Two women come and they begin wiping the face of… Toothless.

How to Train Your Dragon: The Hidden World’s synopsis reads, “From DreamWorks Animation comes a surprising tale about growing up, finding the courage to face the unknown…and how nothing can ever train you to let go. What began as an unlikely friendship between an adolescent Viking and a fearsome Night Fury dragon has become an epic adventure spanning their lives. Welcome to the most astonishing chapter of one of the most beloved animated franchises in film history: How to Train Your Dragon: The Hidden World.”

It continues, “Now chief and ruler of Berk alongside Astrid, Hiccup has created a gloriously chaotic dragon utopia. When the sudden appearance of female Light Fury coincides with the darkest threat their village has ever faced, Hiccup and Toothless must leave the only home they’ve known and journey to a hidden world thought only to exist in myth. As their true destinies are revealed, dragon and rider will fight together—to the very ends of the Earth—to protect everything they’ve grown to treasure.”

How to Train Your Dragon: The Hidden World releases on February 22, 2019.