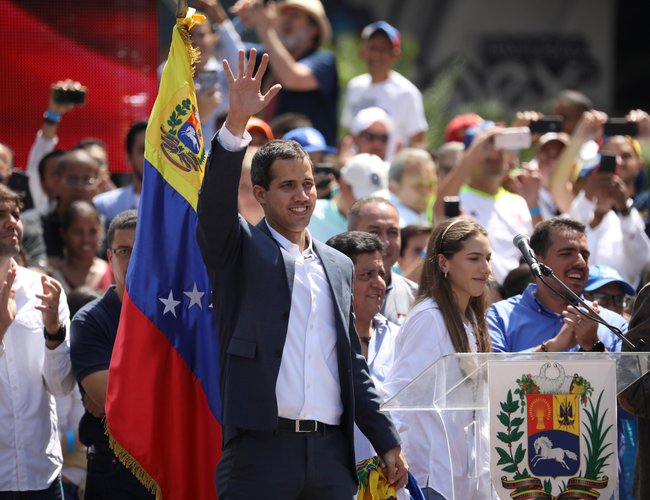 At a time when the government is taking diplomatic moves to control the damage made by Prachanda’s statement, Nepali Congress hits the government for failing to balance Nepal’s position in Venezuela.

After a controversial statement issued by Nepal Communist Party President Prachanda, taking a stand in favor of current socialist president of Venezuela, United States of America took it seriously.

Feeling the US’s quiet anger, foreign minister Pradeep Kumar Gyawali organized a briefing for ambassadors to soften the stand to show the solidarity with democratic forces. However, the anger did not recede.

NCP President and former Prime Minister Dahal lashed out at the U.S move condemning it as a violence of sovereignty. He termed U.S and other western countries’ support to Venezuela’s newly declared president as an act of imperialism to dislodge the socialist government. NCP president Prachanda’s statement was close to Chinese and Russian stand.

Contradicting NCP President Prachanda’s stand, Ministry of Foreign Affairs issued another statement. “The people of Venezuela have the ultimate authority to take a decision on the country’s political and constitutional course. We stand for peace, stability and unity of Venezuela and call for resolution of differences through peaceful means,” said Ministry of Foreign Affairs.

However, it did not woo the U.S. Showing his diplomatic displeasure, the US Ambassador in Kathmandu, Randy Berry, did not attend a meeting that Nepal Prime Minister K P Oli and Foreign Minister Pradeep Gyawali had hosted for the heads of the mission, and instead sent his deputy.

According to reports, the United States sought an explanation from Nepal after former Prime Minister Pushpa Kamal Dahal last week criticized US interference in Venezuela and expressed support for its president Nicolas Maduro. Nepal’s Ambassador in Washington DC Arjun Karki was reportedly told that Dahal’s statement was neither acceptable nor expected by the US.

Dahal’s statement came as a setback to America’s hope to rope in Nepal in the Indo-Pacific Initiative, which US Secretary of State Mike Pompeo proposed when he invited Nepal’s Foreign Minister to a bilateral visit to Washington for the first time in history last month.

Looking at the growing international criticisms on its policy on Transitional justice system and western criticism on recent statement of Prachanda supporting Maduro, Minister for foreign affairs Pradeep Kumar Gyawali briefed the diplomatic community about its own intention.

Opening his statement Foreign Minister Gyawali stressed the commitment of the government towards core values of human rights and democracy. On the peace process and transitional justice system minister said, “you all are aware that the peace process has been fundamentally concluded and we remain committed to addressing the remaining components of transitional justice in the best interest of this country and people.”

Russians Advance On Bakhmut As Allies Mull Jets For Ukraine By Agencies 12 hours, 10 minutes ago