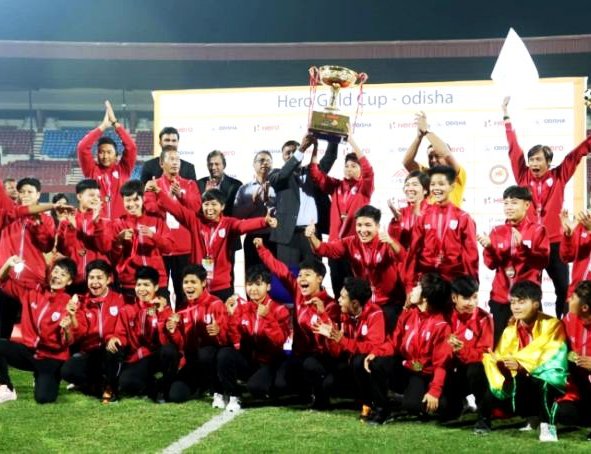 Two second half goals secured Myanmar the inaugural Gold Cup title as the Southeast Asians defeated Nepal 3-1 in the final at the Kalinga Stadium in Bhubaneswar on Friday.

It was a richly deserved victory as Myanmar ended their campaign with four wins, having defeated Nepal 3-0 in their round-robin stage meeting.

Nepal, however, held their own for most of the first half as both teams went in search of the opening goal.

Myanmar, however, took the lead in the 34th minute through Yee Yee Oo but it was a short lived advantage as Nepal equalised just before the half-time break through Manjali Kumari.

A buoyant Nepal started the second half aggressively but it was to prove to be a costly move as Myanmar went ahead for a second time in the 53rd minute through Win Theingi Tun.

The lead was doubled nine minutes later as Yee Yee Oo found the back of the net for the second time to end Nepal's hopes of a first title.

Besides the two wins over Nepal, Myanmar had defeated host India and the Islamic Republic of Iran by identical 2-0 scores. Nepal, meanwhile, qualified for the final after beating Iran 3-0 and India 2-1.

Yee Yee Oo (30th and 62nd minutes) and Win Theingi Tun (53rd) scored for Myanmar while Nepal got the lone goal in the 45th minute through Manjali Kumari.

The first goal-scoring chance came in the opening minute itself, after Nepal’s star striker Sabitra Bhandari broke free and earned a corner. The resulting header was comfortably saved by the keeper.

Myanmar, who had defeated Nepal 3-0 in the opening match of the tournament, started to assert their dominance soon, creating two quick chances in the 10th and 17th minutes.

At the half-hour mark, Nepal looked resolute as they thwarted everything that Myanmar threw at them, but four minutes later, Yee Yee Oo gave Myanmar the lead, with a powerful effort from inside the box that sailed into the top corner past the diving goalkeeper.

However, on the stroke of half time, Nepal grabbed a stunning equaliser through midfielder Manjali Kumari, who latched on to a loose ball inside the penalty area, controlled it on her chest and side-footed a volley into the side-netting for the first goal Myanmar conceded in the competition.

Both sides emerged onto the pitch after the break with renewed vigour and in the 53rd minute, Win Theingi put her side into the lead after some fine play. Controlling a cross from the left with her back to the goal, she turned in style and slammed the ball home.

Yee Yee Oo then added her second goal of the night and doubled her team’s advantage. In the 62nd minute, she sent in a ball from the right that found the Nepal keeper off her guard and it sailed over her into the goal, thus securing a deserved victory for Myanmar.