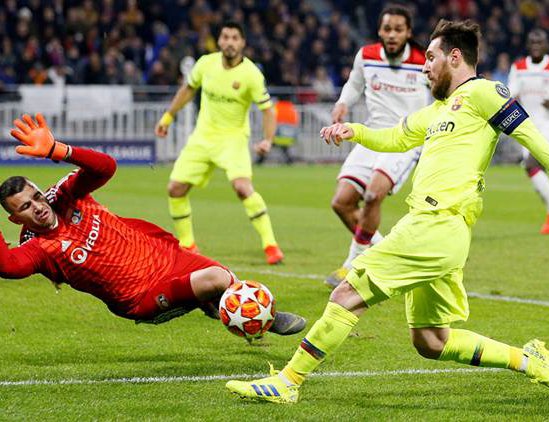 Barcelona were held to a frustrating 0-0 draw at Olympique Lyonnais in their Champions League last-16 first leg on Tuesday as both sides remained unbeaten in this season’s competition.

The La Liga leaders dominated the match at the Groupama stadium but lacked accuracy up front and were grateful to their goalkeeper Marc Andre ter Stegen who made two great saves.

Lyon were lively in the first half but ran out of steam after the break and were holding on in the closing stages as Lionel Messi tried in vain to open up the home defence.

Barca had a total of 25 shots but only five on target and their best chance came in the last minute when Sergio Busquets’s 18-metre attempt was tipped over the bar by Anthony Lopes.

The second leg will be at the Nou Camp on March 13, a game where Lyon will welcome back France striker and captain Nabil Fekir, who was suspended on Tuesday.

“We could have done better in the first half and converted our chances but we did not concede a goal so our chances are intact,” said Lyon defender Leo Dubois.

OL coach Bruno Genesio sprung a surprise by fielding Martin Terrier on the left wing instead of Maxwell Cornet and the 21-year-old did not disappoint.

Barca dominated possession early on, but Lyon had the first two shots on target and it took a couple of superb saves from Ter Stegen to deny the hosts, who never came that close again.

He stretched to his left to parry a vicious low shot by Hassem Aouar in the fifth minute before making a one-handed save to tip a 25-metre Terrier missile onto his crossbar.

Barca forward Ousmane Dembele came close in the 19th minute when he dribbled past Dubois on the left flank, only for keeper Anthony Lopes to deny him in a one-on-one.

The visitors had the upper hand but were uncharacteristically wasteful as they spurned several counter-attacking opportunities.

A Dembele attempt shaved Lopes’s post before Terrier skied his shot over the bar after a superb series of one-twos tore the Barca defence apart as both sides tried to break the deadlock.

Lyon were under siege early in the second period but their defence was perfectly marshalled by Jason Denayer with Dubois also proving decisive against Luis Suarez.

Lopes beat Messi’s angled shot away to keep his side level before Dembele was replaced by Philippe Coutinho, who had a clear chance in the 76th but was denied by in-form Lopes.

Barca have now failed to win any of their last six away games in the Champions League knockout stage, with their last victory coming at Arsenal in February 2016.