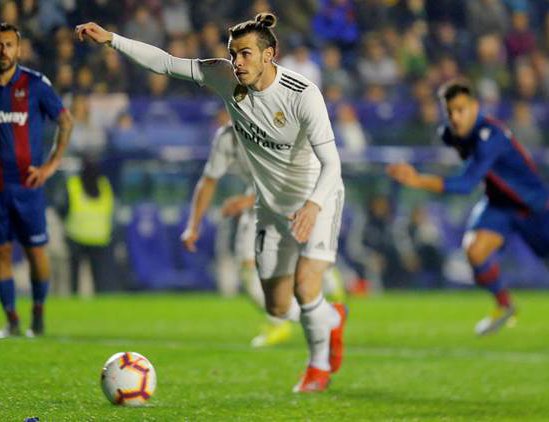 Everyone at Real Madrid, it seems, is fully prepared to face Barcelona in the Copa del Rey semifinals. Even Gareth Bale. Bale’s commitment to the team has been called into question since he failed to celebrate his goal over the weekend, pushing teammate Lucas Vazquez away before heading back to midfield. His attitude sparked a wave of criticism, and rumors he was at odds with the rest of the team.

But with two consecutive matches coming up against Barcelona this week _ the first on Wednesday with a spot in the Copa del Rey final on the line _ Real Madrid coach Santiago Solari was quick to diffuse any notion of problems within the squad.

“We are 100 percent focused on tomorrow’s match,” Solari said Tuesday. “Bale and the rest of the players are fully focused. We are all united and we have the same goal, which is to make it to the final.”

Real Madrid has an away-goal advantage going into the match at the Santiago Bernabeu Stadium after a 1-1 draw at the Camp Nou in the first leg three weeks ago.

“We start the match knowing that if we don’t score we won’t be able to advance,” said Barcelona coach Ernesto Valverde, who will be taking charge of his 100th match with the team on Wednesday. “We have the obligation to score and we know that we are playing against a great rival, but it’s still open. We hope to advance.”

Bale appeared to be upset when Solari chose Marco Asensio as the first substitute in the 2-1 win at Levante on Sunday. After seeing he was not picked, the Wales forward stopped warming up and went back to the bench, staying there for a few minutes until Solari finally asked him to enter the match.

He scored the team’s second goal from a penalty kick and did not celebrate, moving Vazquez away from him and only briefly touching hands with other teammates as he returned to midfield.

The image of Bale “escaping” from Vazquez made it on some front pages in Spain the next day, and forced Solari to evade several questions about him in his news conference on Tuesday.

Veteran left back Marcelo recently had talked about how he still can only communicate with Bale in English, and goalkeeper Thibaut Courtois mentioned that the forward recently missed one of the group dinners because he wanted to go to sleep early.

Bale practiced normally with the rest of the squad on Tuesday, though, with nothing indicating he would not be included in the squad for the match. It wasn’t likely he would start, however. In the first leg, Solari began with Vinicius Junior in the lineup and Bale on the bench.

A player certain to start on Wednesday is Lionel Messi, who is coming off a stellar performance in Barcelona’s 4-2 win against Sevilla over the weekend, when he scored a hat trick and set up another goal to rebound from a series of poor performances.

Messi did not play the entire first leg against Madrid because of a right leg injury.

Solari said there was no reason to fear Messi, regardless of how well he was playing.