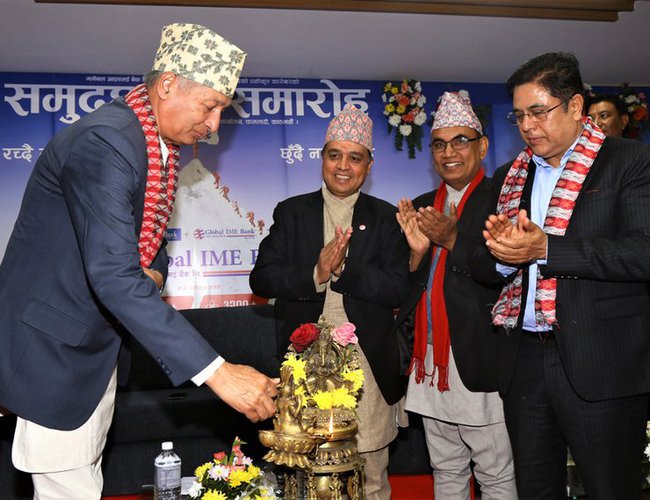 With so many innovative ideas, Dhakal has been investing in various sectors of Nepal. He has turned Chandragiri Hill into a historical, spiritual, natural and recreation center for all in Kathmandu Valley.

From the very beginning, Dhakal visualized to make Global IME a bank for the whole of the country and outside it. After merger with Janata Bank, Global IME Bank's branches have reached all over Nepal.

For the last few years, Global IME Bank has also expanded its branches abroad providing access to those who remit the money back home.

According to a press release issued by the bank, the paid-up capital of Global IME Bank has reached Rs. 24 billion making it the largest commercial bank of the country. Similarly, Global IME Bank now has more than 300 branches, 295 ATMs and 33 extension counters across the country. 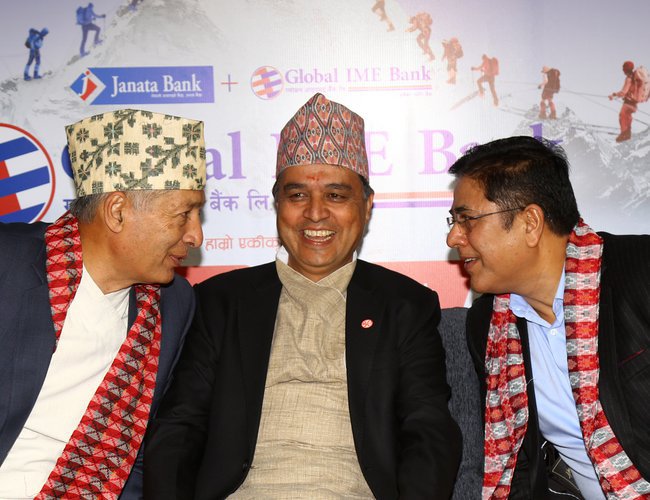 Industrialist Chandra Dhakal is the chairman of Global IME Bank and Parshuram Kunwar is its chief executive officer.

Both the banks have completed the merger process and the merged entity has started integrated transaction under the name of Global IME Bank. The merger between these two banks also means that the number of commercial banks in the country has come down to 27 at present.

Finance Minister Yubaraj Khatiwada attended the program as a chief guest. Nepal Rastra Bank (NRB) had approved the merger plan of these two big commercial banks and had given them three months to complete the process and launch operations as one unit in September.

Addressing the program, Finance Minister Dr. Yubaraj Khatiwada advised the banks to give priority to public benefits and interests. He expressed the hope that Global IME Bank would now keep the public interest uppermost. Citing that a bank becoming bigger in size also means enhanced capacity to invest, he urged Global IME to raise its investment in mega projects across different sectors.

As usual, however, finance minister Dr. Khatiwada criticized the policies of banks to give high priority to their promoters and many facilities being provided to the chief executive officers. He said that banks are giving priority to the CEO’s facilities rather than the interest of common people.

Governor of Nepal Rastra Bank Chiranjibi Nepal said that the merger between Global IME Bank and Janata Bank will encourage other commercial banks to opt for mergers. He also asked the board of directors of banks not to put undue pressure on the chief executive officers to increase profits.

"What I want now is to make our banks more efficient, competent and professional to provide banking facilities to the all types of people in all the regions," said Dhakal.

Dordikhola To Generate 27 MW Electricity From Mid-July By Agencies 3 days, 13 hours ago

Asia-Pacific Can Emerge From Pandemic "Stronger Than Before" — ADB President By NEW SPOTLIGHT ONLINE 6 days, 2 hours ago

Nepal Has Started The Import Of Electricity From India On Saturday In New Rate By NEW SPOTLIGHT ONLINE 1 week, 2 days ago