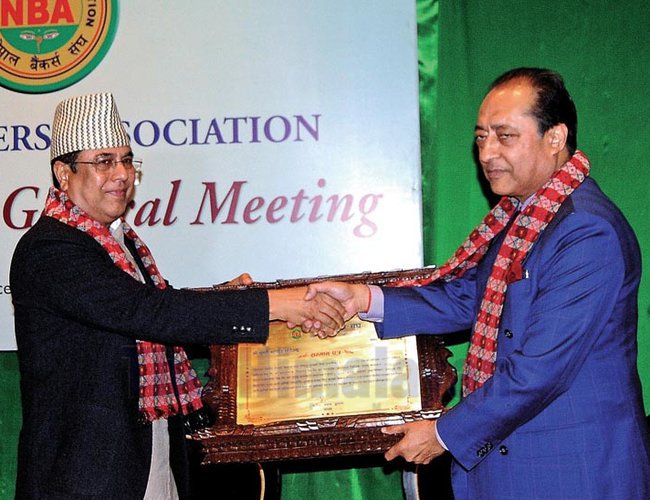 His contributions to promote and strengthen private banking sector in Nepal is immense. After managing Himalayan Bank for 10 years and establishing the bank as a successful venture, Pande has shown that Nepalese also have the capacity to run banks on their own.

Following a decade-long service at the central bank, Pandé went on to initiate the first Nepali-led joint venture Bank — Himalayan Bank Ltd — in 1988. After managing Himalayan Bank for 10 years, Pandé became engaged with Nepal Indo Suez Bank, the current NIBL. It has now been seven years since he stepped away from his role as an executive chairman of NIBL.

NBA felicitated Pande for his remarkable contribution to the country’s banking sector over the last four decades and role he has played in strengthening Nepal’s financial sector.

Nepal Rastra Bank (NRB) Governor Chiranjibi Nepal felicitated Pandé, the chairperson of Nepal Investment Bank Ltd (NIBL), as one of the pioneers in banking industry and praised his contribution in boosting the standards of country’s financial institutions in a function organized to celebrate 23rd annual general meeting of NBA.

Former president of NBA, Pandé started his banking career as a chartered accountant at Nepal Rastra Bank in October 1978.

“The experience I garnered during my time at NRB laid the foundation, opened up opportunities, boosted my self-confidence and expanded my network, which in turn prepped me for my career shift as a commercial banker,” said Pandé after being felicitated.

Pandé stressed that the prime challenge facing the banks is their large number. “NRB has realized this and has started the process of consolidation. NRB is on the right path as we need more mergers and acquisitions of banks,” he opined.

However, Pandé said that mergers and acquisitions can happen only if bankers, especially the promoters of banks, shed their egos and put the welfare of the industry rather than themselves at the centre, and take the initiative to lower the number of banks, make them stronger and better, lower overhead costs and ensure greater outreach and diversity.

“Meanwhile, the government and NRB should also provide more incentives to quicken the process of consolidation in the banking sector,” added Pandé.

Similarly, Pandé also urged banks to keep pace with rapid advancements in technology and come up with new products in tune with the times. “If banks just continue to stick to traditional banking, they will face difficulties in the future.”

Pandé, who categorized life into three phases — learning, earning and giving — said he has entered the third phase and will devote his time, energy and funds in promoting arts and culture, which ‘should be preserved for the future generations’.

Sunkoshi-Marin Diversion Project To Irrigate 120.000 Hectors Of Land In Province 2 By Agencies 1 day, 3 hours ago