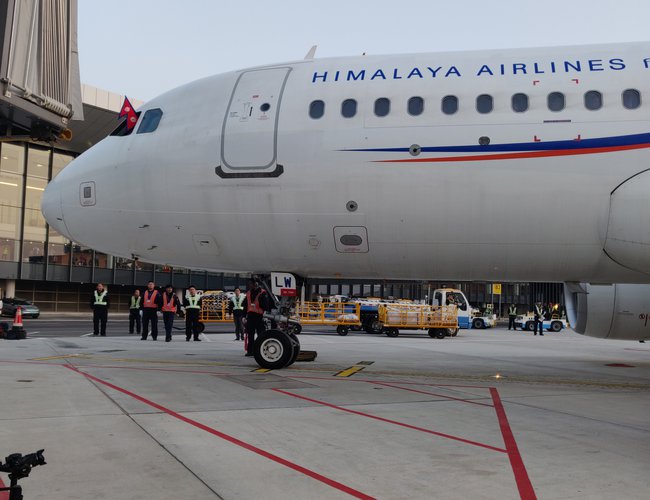 Minister for Culture, Tourism and Civil Aviation Yogesh Bhattarai inaugurated the first flight of the airlines amidst a special ceremony held at Tribhuvan International Airport on Thursday.

Congratulating the airlines, Minister Bhattarai said, “China-Nepal connectivity is important in terms of promoting bilateral relationships between the two countries. With Himalaya’s growing network, we look forward to strengthening the congruence of both the countries on all fronts especially in tourism sector. We wish a great success to Himalaya in its operations.”

He said that the Chinese airlines would operate flights to our new international airport, Gautam Buddha International Airport, which will come into operation within a few months.

Marking the celebrations of the Chinese New Year Eve, the Himalaya Airlines, a Nepal-China joint venture international airline, launched its service on yet another route to China, connecting Kathmandu to Chongqing, a major tourist city of China.

Hou Yanqi, Ambassador of the People's Republic of China to Nepal, Kedar Bahadur Adhikari, Secretary at the Ministry of Culture, Tourism and Civil Aviation and Rajan Pokhrel, Director General of Civil Aviation Authority of Nepal (CAAN), and other high level government officials were present on the occasion.

Himalaya is the only airline operating direct flights between the two cities.

The return flight from Chongqing was expected to depart at 17:00 hours (local time) and would arrive at TIA at 19:15 hours, the same day. It will operate three flights in a week on Monday, Thursday and Saturday.

Chinese Ambassador to Nepal Hou Yanqi remarked, “We appreciate the continuous efforts of route expansion by Himalaya Airlines which is bringing the two countries closer day by day.”

Zhou Enyong, President of Himalaya Airlines, said, “It is indeed a great pleasure to announce this new route on the auspicious occasion of the Spring Festival, our Chinese New Year gift to all the travelers from China. As Nepal sets off for its global tourism campaign “Visit Nepal Year 2020” the launch could not have got any better timing.”