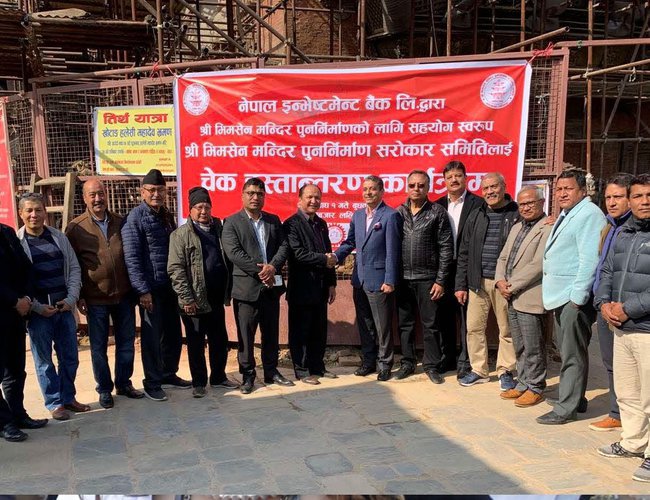 Just a few days after announcing huge dividends to bank's share holders out of its profits, Chairman of NIBL Pande handed over Rs. 5 million to reconstruct Lalitpur's oldest and highly important Bhimsen Temple. At a function organized in Lalitpur, Chief Executive Officer of the Bank Jyoti Prakash Pande handed over the chequ to chairman of Bhimsen Mandir Rebuilding Committee Krishna Lal Maharjan.

Starting the reconstruction of the temple, taking support from Nepalese with a slogan of Build Our Heritage On Our Own, the fund of Rs.5 million will immensely contribute to the work. The committee is expected to complete the reconstruction with an investment of Rs.500 million.

This is not the first heritage site in Kathmandu Valley for which Pande has provided support. He also contributed to the reconstruction of Sundarichok of Patan Durbar square and other few sites. Similarly, NIBL under the leadership of Pande, also supported the reconstruction of Aryaghat a few years ago.

At a time when the committee is in the process of collecting the fund, NIBL's contribution will further shorten their total requirement.

Shree Bhimsen Mandir Rebuilding Committee thanked Pande for his support in reconstruction of the temple. Chairman Pande said that this support is part of his commitment made earlier.

Nepal Investment Bank Limited handed over cheque of Rs.50 Lakh for supporting rebuilding of Shree Bhimsen Temple, Lalitpur. The temple was badly damaged by earthquake and it is now under construction through the support from various institutions and individuals.

Home to the main god of the business community of Lalitpur, the temple was destroyed by the earthquake of 2015. Following the request of local community, traders, various organizations, Mangal Tole Sudhar Samiti, Lalitpur Metropolitan City and Lalitpur Industry and Trade Association have decided to lead the reconstruction of the temple. 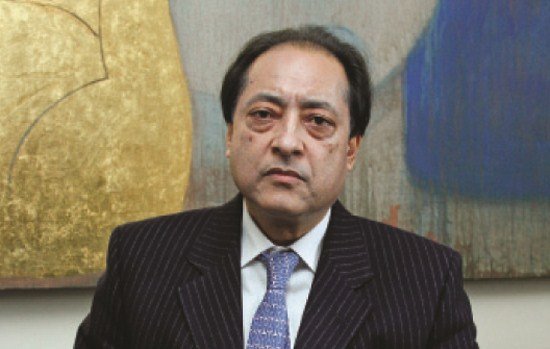 "NIBL chairperson Pande has been a part of conservation of temples and palace of Patan. His recent support is another major contribution to the reconstruction of heritage of Patan" said Maharjan. He said that people of Patan will always remember NIBL for its continual support.

"NIBL has been supporting the conservation efforts of Patan's temple for long and the bank came to us again when we are in need of fund to complete the reconstruction in time," said Pradhan. "For this, we are very thankful to chairperson of NIBL Pande."

A great lover and keen watcher of heritage of Nepal, Pande is always on the forefront in efforts of conservation of Nepal's heritage sites. Without boasting, Pande has been quietly supporting the moves to protect the temples.

The World Bank To Provide US$ 45 Million To Promote Sustainable Livelihoods By NEW SPOTLIGHT ONLINE 21 hours, 25 minutes ago