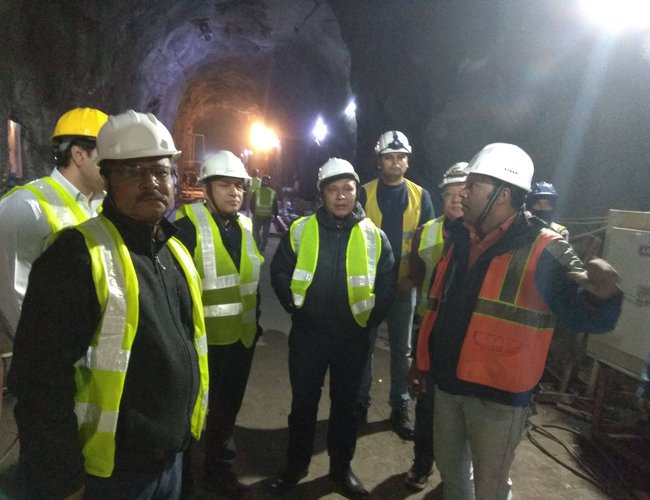 According to a press release, the work is going on to complete the work at the middle of May and start generation in end of June. Total height of vertical shaft is 672.5 meter except bend.

“As there is scarcity of cement due to lock down, the project is managing the cement. If cement is available, the work of LPS will complete by middle of May and UPS by end of May. Managing director Kul Man Ghising himself is pushing work personally,” said Bigyan Prasad Shrestha, Chief Executive Officer of Upper Tamakosi Hydropower Company.

“However, special chemicals need to import from India including Horizontal Penstock pipes and equipment for horizontal Penstock press test is affected due to lockdown in India. Due to the reason, it may affect the work,” said Shrestha.

Now there need to complete 147 and 171 meter in lower and upper vertical shaft. Since the time for installation of two 10 meters long pipe come down to seven and five days, the project says that the installation of work will complete by 2020.

Inspecting the construction sites Gonger, MD Ghising held a joint meeting with officials of project, consultant and all three contractors. During the meeting, all concerned contractors expressed their commitments to work in accordance with work routine.

MD Ghising said that prime minister and energy minister are very much concerned about the project and they want to see the generation from first unit within current fiscal year. He directed contractors to work as they promised within agreed time frame. He also said that he is ready to facilitate necessary coordination and cooperation.

MD Ghising also expressed the satisfaction that the contractor of Lot 2 also accelerates the work.

Shrestha said that the grouting and concreting in the main tunnel is in final stage. Similarly, the installation of gates in Adit Tunnel of main has already prepared. Similarly, installation of equipment in the power station has already completed. The construction of 127 towers of transmission line and 47 kilometer transmission line has completed.

The civil work in 220 kV substations in Khimti is in final stage and installation of equipment in the substation is underway.

The project has delayed due to earthquake, aftershock, landslide flood and disruption of supply during Madhesh Agitation, design change and slow work of contractor of lot 2.

NBA Decides to Operate BfIs Throughout Business Hours From 21 June By Agencies 1 day, 18 hours ago