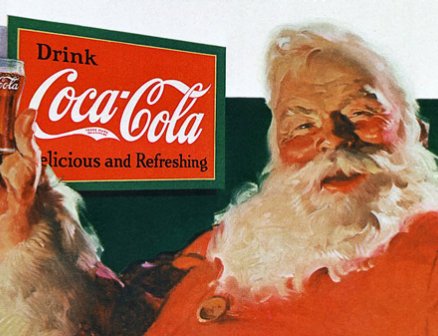 During the month of December, a white bearded man dressed in red coat with white fur collar and cuffs carrying a bag over his shoulders has been quite a common sight to see in Nepal, especially since the past decade. They seem to be almost everywhere this time of the year, from the malls, the super stores and the roads of New Road. It’s always good to see these men jolly in the red and white costumes, singing songs, waiving their hands to pedestrians and wishing a wonderful Christmas to everyone they see.

Prior to 1931, Santa Claus had a very different look to what we know and love now. Back then, Santa was depicted as everything from a tall gaunt man to a spooky-looking elf. A Civil War cartoonist Thomas Nast drew Santa Claus Harper's Weekly in 1862 as a small elf-like figure who supported the union. Nast later on continued to draw Santa for 30 years, changing the color of his coat from tan to the red he’s known for today.

89 years ago, thanks to one man's imagination and artistic touch, the contemporary vision of Santa Claus as a jolly looking gentleman with a white beard was born. Created by Swedish-American artist Haddon Sundblom for a long-running series of holiday advertisements for Coca-Cola, today's cherished version of Santa Claus is at once recognizable around the world as an emblem of the holiday season.

The Coca-Cola version of Santa was first introduced in 1931, created by a Swedish-American artist Haddon Sundblom, appearing in a series of print ads in - The Saturday Evening Post, Ladies Home Journal, National Geographic and other U.S. publications. The captivating images struck a chord with the public, which almost instantly adopted the lovable personification as an enduring symbol of Christmas. Over the next few decades, the artist's depictions of Saint Nicholas evolved into the picture-perfect look of "Father Christmas" - the man in the red and white suit with the big brass belt buckle.

From 1931 to 1964, Coca-Cola advertising showed Santa delivering toys (and playing with them!), pausing to read a letter and enjoy a Coke, visiting with the children who stayed up to greet him, and raiding the refrigerators at a number of homes.

Another fun fact is that the Coca-Cola Santa was based on a salesman. Sundblom initially modeled Santa's smiling face after the cheerful, somewhat wrinkled features of a friendly retired salesman Lou Prentiss. When Prentiss passed away, Sundblom used himself as a model, painting while looking into a mirror. Finally, he began relying on photographs to create the image of St. Nick.

The Coca-Cola Santa image was so loved by people that they started paying very close attention to details of him and when anything changed, they sent letters to The Coca-Cola Company. Once when Santa’s belt was backwards and the other when Santa Claus appeared without a wedding ring, causing fans to write asking what happened to Mrs. Claus.

Santa Claus got a new friend in 1942 named “Sprite Boy," a character who appeared with Santa Claus in Coca-Cola advertising throughout the 1940s and 1950s. Sprite Boy, who was also created by Sundblom, got his name due to the fact that he was a sprite, or an elf. (It wasn’t until the 1960s that Coca-Cola introduced the popular beverage Sprite.)

Sundblom created his final version of Santa Claus in 1964, but for several decades to follow, Coca-Cola advertising featured images of Santa based on Sundblom’s original works. These paintings are some of the most prized pieces in the art collection in the company’s archives department and have been on exhibit around the world, in famous locales including the Louvre in Paris, the Royal Ontario Museum in Toronto, the Museum of Science and Industry in Chicago, the Isetan Department Store in Tokyo, and the NK Department Store in Stockholm. Many of the original paintings can be seen on display at World of Coca-Cola in Atlanta, Ga.

In 2001, the artwork from Sundblom's 1963 painting was the basis for an animated TV commercial starring the Coca-Cola Santa. The ad was created by Academy Award-winning animator Alexandre Petrov.

Coca-Cola definitely did not create the legend of Santa Claus. But Coca-Cola advertising did play a big role in shaping the jolly character that we know of today.

Bangladesh Is Ready To Buy Electricity Generated In Nepal: Ambassador Chowdhury By Agencies 1 day, 7 hours ago