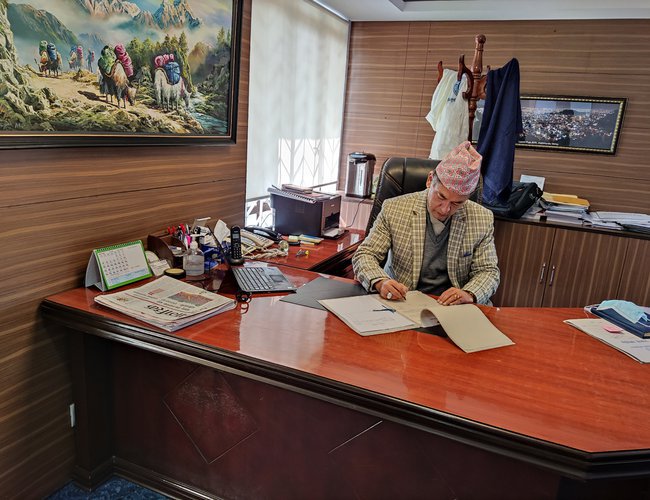 Although his predecessor Kul Man Ghishing was also groomed in NEA, there was generally a trend to make political appointment as well. By appointing Shakya as MD, the government has given continuity to promote NEA’s employees at the top. This step will encourage other NEA employees as well.

Giving up its own promises to select the new MD through open competitive announcement, the government led by K.P. Sharma Oli has appointed Shakya on a promotional basis.

As a person who knows the ins and outs of NEA, Shakya can make a lot of difference to the organization taking the right decision at the right time. However, it is not easy to for him, given a lot of vested interests around NEA.

A Cabinet meeting appointed Hitendra Dev Shakya as the chief of the Authority.

Before appointment as acting MD, Shakya was leading NEA Engineering Company. Ministry of Energy, Water Resources and Irrigation appointed him as the acting chief of the NEA on November 9, last year.

The top post at the authority has been vacant since the retirement of Ghising, who is largely credited for bringing decades-long load-shedding in the country to an end. Ghising was appointed to the top post of NEA in 2016.

Shakya, newly appointed Managing Director of the Nepal Electricity Authority (NEA), said that his priority is to increase Electricity consumption rate to 500 units per individual in the next four years.

Assuming the office of Managing Director of NEA, he made it clear that his main priority for coming four years will be to strengthen and expand transmission line to increase the consumption and to provide reliable and quality electricity to consumers. He also said that his other priority is also to explore the market for surplus energy.

A Cabinet meeting on February 8 this year had appointed Shakya to the post for four years tenure.

Addressing an event organized to welcome and congratulate him, Shakya pledged to increase power consumption rate to 500 units per individual in next four years.

He said that he will work for reduction of electricity leakage, expansion and strengthening of transmission system for the distribution of quality electricity to consumers.

Signed under a take or pay PPA, the selling of electricity generated by hydropower during the summer is challenging. “I will give priority to increase internal consumption and work to export surplus electricity to India,” said Shakya, addressing the gathering of officials.

“We have enough electricity for the distribution. However, there is a lack of resources as well as obstructions at the local level to change the old structures,” said Shakya. He said that NEA will address all these challenges using information technology at optimum level.

Deputy Managing Director Lekhnath Koirala said that distribution management is a critical challenge of NEA. Official Trade Union Leader of NEA Rameshwor Poudel said that there is the need for the leadership to keep the success achieved by NEA in the past intact.

Unlike his predecessor Kul Man Ghising, who was appointed with an agenda to end the load shedding, MD Shakya has now other challenges. Following the completion of his four-year tenure, Ghising left the NEA completing various projects with surplus of electricity during the rainy session.

In addition to well built infrastructure of transmission line and surplus energy; MD Shakya has now challenges to search a market for the electricity. As MD Ghising had spared much of his time to end the load-shedding, completing incomplete hydropower projects, transmission line project, newly appointed MD Shakya will spend much of his time to search for a reliable market for surplus energy and reduce the leakage.

Having worked several years in NEA in different capacities, MD Shakya, an electrical engineer, is not new for the organization. He has seen all different phases of NEA including prolonged periods of load-shedding and no load-shedding.

With the ending of load-shedding, former MD Ghising willingly and unwillingly became a popular figure. Frustrated by decades of power cuts, of up to 16 hours, people saw MD Ghising’s effort at ending the load shedding as a miracle.

Capable as his predecessor Ghising, his performance will be determined by his actions and implementation of his plan of actions.

ARUN III Getting Ready To Go By A Correspondent 7 months, 3 weeks ago

ELECTRICTY DEMAND Managing Gap By A Correspondent 9 months, 1 week ago

Nepal To Construct 23 High-Capacity Transmission Lines Across The Country By Agencies 10 months, 3 weeks ago