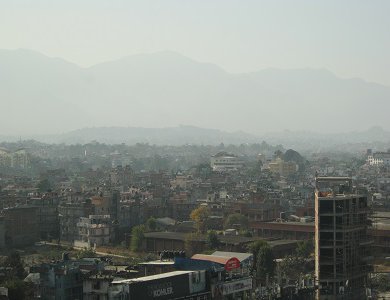 Air pollution has increased in many parts of the country, including in the Kathmandu Valley, due to lack of sufficient rainfall this season reports The Rising Nepal.

According to daily, meteorologists have said that dust particles have been accumulated in the atmosphere and there is no likelihood of rainfall or wind to clear the dust particles in the air immediately.

According to senior meteorologist Meen Kumar Aryal at the Meteorological Forecasting Division under the Department of Meteorology and Hydrology (DHM), the present cloud in the atmosphere is caused by the impact of western disturbance and it will remain so until Wednesday night.

There is no-way-out of atmospheric pollution in the Valley until and unless there is heavy rainfall or wind to clear it, he said.

“Even though the pre-monsoon has started in the country, there is no sign of rainfall. We cannot say the exact reason for this but this might be due to the global impact of weather pattern,” Aryal said.

Indu Bikram Joshi, Deputy Director General at the Department of Environment, said that the pollution level in various parts of the country, including the Valley, has increased lately due to lack of precipitation.

Air pollution has increased in Kathmandu, Bhaktapur, Lalitpur, Hetauda, ​​Biratnagar, Simara, Janakpur, Dhangadhi and other areas of the country. “If there is sufficient rainfall on time, the pollution level would go down but this year there has not been enough precipitation throughout the year, which increases the risk of rising air pollution in the country, especially in the Valley, Joshi said.

India Urges Nepal To Remove Encroachment From Border In Uttarakhand By Agencies 2 days, 13 hours ago

Nepal Should Prepare In Advance To Be Eligible For GSP Plus: Ambassador Nona Deprez By NEW SPOTLIGHT ONLINE 3 days, 4 hours ago