Nepal Government To Resume Vaccination Campaign From May 16

Nepal Government To Resume Vaccination Campaign From May 16 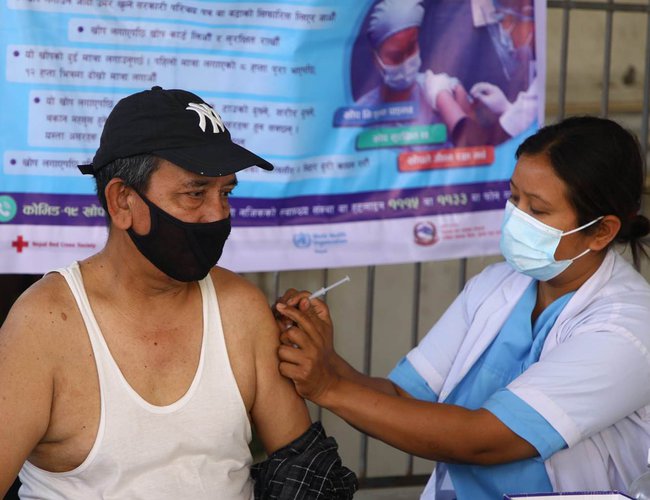 The government's COVID-19 vaccination drive, which had been halted due to the second wave of the pandemic followed by prohibitory orders in various parts of the nation, is being resumed reports The Rising Nepal.

Dr. Jhalak Sharma Gautam, chief of the national immunisation programme, said, "The vaccination of the second dose of Vero Cell, provided by China, will begin from May 16. Also, we will start administering the second dose of Covishield soon."

Stating that of the total people vaccinated until now, only 500,000 had received the second dose, Dr. Gautam informed that the remaining stock of Covishield would be sent to all 77 on a priority basis for the second round of vaccination.

The government had introduced the vaccination drive with Covishield vaccine, which was received under grant assistance from India, in all seven provinces from January 28. The frontline health workers had received the jab in the nation's first-ever vaccination campaign against COVID-19.

As the inoculation centres were being overcrowded whilst the virus was spreading rampantly, the government had postponed the vaccination campaign on April 28.

The campaign is now resuming from May 16 where the second dose would be administered to 288,000 people who have already received the first jab of Vero Cell.

China Reports Over 6,300 COVID-19 Patients Died In The Week Through Thursday By Agencies 8 hours, 23 minutes ago

WHO To Decide Whether COVID-19 Remains Global Health Emergency By Agencies 2 days, 9 hours ago