Fifteen Died, 25 Has Gone Missing And Hundreds Displaced In The Flood

Fifteen Died, 25 Has Gone Missing And Hundreds Displaced In The Flood 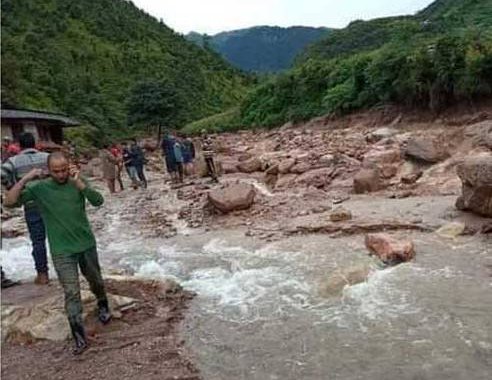 Fifteen people have been killed in floods, landslides and inundation in different parts of the country due to incessant rains from June 13 to 18.

The deceased include nine men, three women, two boys and a girl. Of them, three each in Sindhupalchowk and Doti districts, and one each in Saptari, Kavre, Gorkha, Jumla, Arghakhanchi, Palpa, Kaski, Kalikot and Bajura.

Sixteen people have been injured in the floods, landslides and inundation. Of them, 10 are men, four women and two girls. Among them, six are in Sindhupalchowk, three in Myagdi, two each in Jumla and Doti, one each in Kaski, Syangja and Salyan districts. The injured have been taken to local hospitals for treatment.

Twenty-five people have gone missing in floods and landslides. Of them, 17 are men, five women, two boys and one is a girl. Of them, 17 are in Sindhupalchowk, seven in Jajarkot and one in Bajura. The search for the missing continues.

According to Nepal Police spokesperson and Senior Superintendent of Police (SSP) Basanta Bahadur Kunwar, a total of 102 people, including 94 from Sindhupalchowk and eight from Salyan, have been rescued. They have been taken to various hospitals for treatment.

Roads in various places that got blocked due to landslides and floods have been reopened by the security bodies. Work is underway to remove landslides in Darchula, Humla, Surkhet, Kalikot, Salyan and Dailekh, according to the highway blockade information issued by National Disaster Risk Reduction Management Authority.

So far, a total of 199 houses have been inundated due to the floods. Similarly, a total of 138 houses, 11 cowsheds, 12 bridges, one school and seven government offices have been damaged. A total of 1,760 people from 528 households have been displaced and 516 livestock have died. Also, the area police office in Sindhupalchowk has been shifted to Helambu and police post to Talamarang due to floods and landslides.

Bedh Nidhi Khanal, assistant spokesperson for NDRRMA, said that a joint squad of Nepal Police, Nepali Army and Armed Police Force from the concerned police office are actively involved in the rescue and mitigation of the damage in the affected areas.

In addition, the rescue team is working to relocate the families at risk of floods and landslides in safer places in coordination and support of various agencies and local representatives.

Meanwhile, NDRRMA Chief Executive Officer Anil Pokhrel said that the government has now focused on relief distribution and proper rehabilitation of those rendered homeless from the monsoon-induced disaster.

“The government (Ministry of Home Affairs) has directed to distribute relief to the flood and landslide victims and other affected families through one-door system. The Ministry has given written and verbal instructions to the district administration offices to distribute relief materials only through the local level,” CEO Pokhrel said.

The Ministry has directed to immediately provide Rs. 15,000 for a family of up to five members and Rs. 20,000 for those having more than five members who have lost their homes and have displaced, he said.

According to the Ministry of Home Affairs, Rs. 999.1 million is currently in the disaster management fund of all 77 districts for relief management. Similarly, the National Disaster Management Fund headed by the Home Minister has Rs.1.30 billion. The Central Disaster Relief Fund, chaired by the Prime Minister, has Rs. 4.14 billion.

Earthquake In Doti: Nepal Army Is In Rescue Operation, 200 Aftershocks So far By NEW SPOTLIGHT ONLINE 3 weeks, 5 days ago

Earthquake In Sudur Paschim: Six killed In Doti By Agencies 3 weeks, 5 days ago