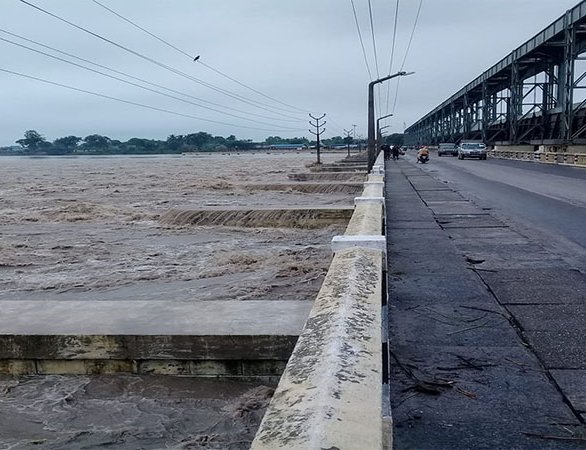 The water level in the Koshi river, the largest river in the country, continues to rise following the incessant rainfall for some days. The highest water level so far this year was recorded this morning.

The measurement taken at 9 am today showed that the water flow in the Koshi Barrage is 231 thousand 515 Cusecs. The water flow at 12 midnight on Friday was 155 thousand 775 Cusecs, the Barrage Control Room stated.

Twenty-eight out of 56 sluice gates of the barrage have been opened in view of the rising water flow in the river. A red lamp has been lit at the Barrage as an indication of a danger sign considering the rise in water level.

The local administration has also alerted the people living close to the river bank and urged them to take precautions. Incessant rainfall in the mountainous and hilly regions has caused the tributaries of the Koshi river to be flooded, hence the rising water level in the river.

The water flow in the river has increased by 24 thousand 995 overnight Friday. It is estimated that the water level will likely rise in the river with rainfall continuing in the mountainous and hilly regions upstream.

Likewise, around 200 houses at Ward Nos. 1, 2, 3 and 4 at Saptakosi municipality in Saptari district have become waterlogged as the water from the swollen Triyuga, Amaha, Tengra, Gangajali and Satarapatara rivulets gushed in the settlements, municipality mayor Uttam Gautam said. The flooded Triyuga river has started eroding the embankment between Ward no 2 and Ward no 3 of the municipality.

Kathmandu Jolted By 4.7 Magnitude Earthquake By Agencies 2 weeks, 6 days ago

FLOOD AND DISASTER Unprecedented Loss By A Correspondent 8 months ago