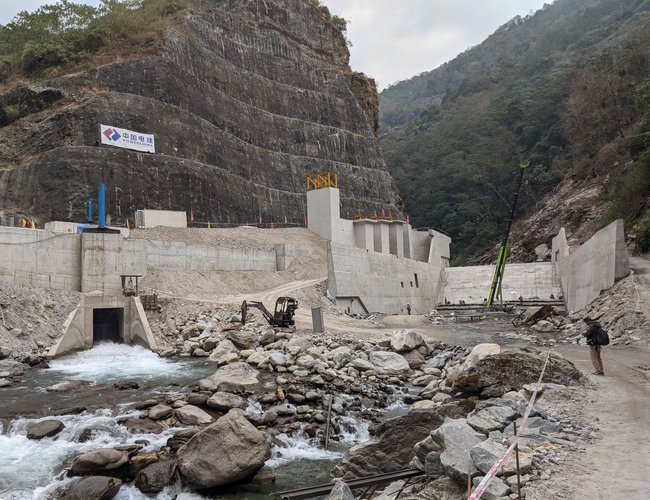 “My opinion regarding the decision taken to dewatering the Melamchi Tunnel in the process of inspection just two days before the major flood in Melamchi river was the blessing of Lord Pashupatinath. Had the tunnel had not closed for dewatering, the flood would have created more complications to the project,” writes former Secretary of Ministry of Water Supply and now the member of Public Service Commission Madhav Belbase in his Facebook wall.

Belbase, who has played a major role to successfully bring the water from Melamchi and distribute in the valley, is a well-known engineer. Following the completion of the project paving the way for the inauguration, Belbase is also given the title of Bhagirath for his contribution to bringing the water to thirsty Kathmandu as what Bhagirath, a saint had done bringing Ganga from heaven to earth.

Although temporary structures have been damaged, permanent structures of the project such as the main tunnel have not been affected by the flood, according to the project.

Rajendra Panta, the spokesperson at the Melamchi Drinking Water Development Committee, said that the head work of the Melamchi project was found to be buried while the bridge over Ambathan has also been destructed.

Panta said that the Melamchi flood has also damaged other temporary structures of the project. According to Panta, the flood had washed off the project's labor camp and had buried the headwork.

Given the level of water and destruction the muddy floodwater of Melamchi had done in the surrounding areas up to the Melamchi market, it has not done any harm to the tunnel due to the decision to close the tunnel to dewatering for inspection.

Although the Melamch flood has washed out the project offices, equipment, seven employees, temporary cofferdam, bridges road and equipment and construction materials, the tunnel remains safe and secure.

Took almost two decades, 27.5 kilometer tunnel is a major part of the project. Since the flood had not done any harm to the tunnel, it will likely start the distribution of the water within three to four months.

Pant said that track opening work to the headwork area has been started in coordination with wards no 1 and 2 of Helambu Rural Municipality.

The Melamchi Water Supply Development Board has informed that the repair and reconstruction of the road to the project site from Melamchi bazaar, which is 18 km in distance, has started so as to reach the headwork area of the project.

The MWSDB spokesperson expressed optimism that water could be supplied to Kathmandu by October end once clear water starts flowing in the river as the floods have not damaged the permanent structures of the project site.

Inspection of the tunnel for any necessary improvement could be done by entering from its end point in Sundarijal, according to him.

As the temporary tunnel of 200 meters in length at Ambathan has been filled with sand carried by the flood, it needs to be cleaned. The tunnel could be filled with water again by October end by cleaning the tunnel, according to the project.

The technical team that was heading for the starting point of the project tunnel to assess the damage caused to the project structures could reach only near the site, some 3 kilometers from Melamchi Bazaar.

The 7-member team comprised of technicians from the project, Construction Company and Consultant Company reached as far as Kyul of Sindhupalchwok and returned as it could not move further as the road was damaged.

The team returned because it was deemed necessary to take tents and materials for living and food items there, said spokesperson Pant. The team will visit the site within a few days.

He said that upon inspecting the flooded area via helicopter the team found that the flood had caused loss worth billions of Rupees to the project.

A total of six laborers, three Indian and Chinese nationals each, working at Melamchi Drinking Water Project have gone missing in the Melamchi River flood.

"The camp in Ambathan where the laborers were residing was swept away by the flood. Since then, they have gone missing," said Panta.

Following the initial study by experts, it is reported that Melamchi floods may have been caused by Cloud Burst, Landslide Dam Outburst or Avalanche, or some other cause. This is also a major lesion for other hydropower and drinking water projects to prepare all necessary safety measures and risk assessments before taking the venture.

Although Nepal has seen several such cloud outburst including one in Kulekhani in 1993 which had made enormous damage to the road and the Kulekhani project, Nepal failed to learn the lesions.