Flood In Melamchi, Chanaute Bridge Was Washed Away

Flood In Melamchi, Chanaute Bridge Was Washed Away 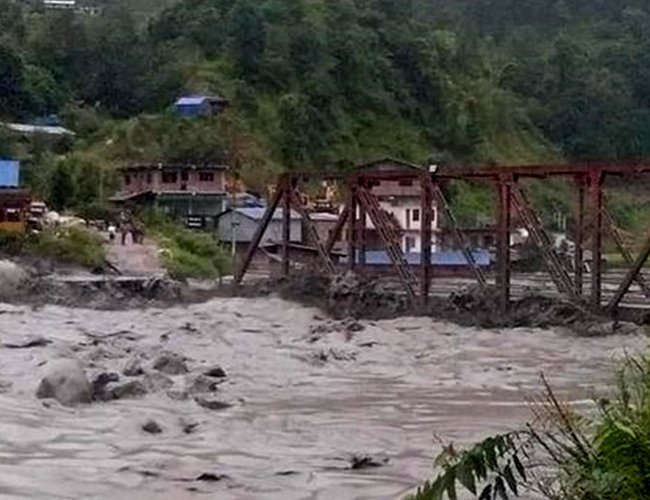 The flooded Melamchi river has washed away the red bridge over the river in Chanaute. According to local resident Hasta Pandit, the bridge collapsed at 7:45 this morning.
The bridge was the only way connecting Melamchi-7 and 8, Panchpokhari 1 and 2 and many wards of Helambu. With the collapse of the bridge, traffic in the area has been closed.
The floods have also washed away a suspension bridge in Gyalthum. According to Rajan Adhikari, Superintendent of Police, District Police Office, Sindhupalchowk, Gyalthum Bazaar is also at risk due to rising water level in the river.
The administration has urged to remain vigilant considering the rising water levels in Melamchi inflicting further damage. Earlier, Nima Galgyen Sherpa, chairperson of Helamu rural municipality, had urged the people living in the coastal areas of Melamchi river to be vigilant saying that floods in Nakote river in Helambu could lead to flooding of the Melamchi river.