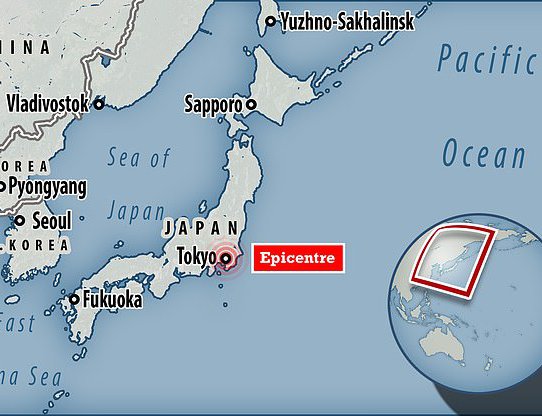 A magnitude 6.1 earthquake has struck near Tokyo. Officials said there is no tsunami threat.

The quake occurred at 10:41 p.m. on Thursday. Its focus was in Chiba Prefecture east of the capital, at a depth of 80 kilometers. The tremor was widely felt in the greater Tokyo area.

The quake registered an intensity of up to five-plus on Japan's seismic scale of zero to seven.

The Japan Meteorological Agency said Thursday night's earthquake was the strongest to strike parts of Tokyo and Saitama since the mega-quake shook the country's northeast in March 2011.

Thursday's quake had a preliminary magnitude of 6.1. It jolted parts of Tokyo and Saitama with an intensity of five-plus on the Japanese scale of zero to seven.

The 2011 quake had a magnitude 9.0. It registered an intensity of six-minus in a town in Saitama Prefecture and five-plus in other parts of Saitama and large areas of Tokyo, including its 23 wards.

The strong earthquake led to the suspension of train services across the Tokyo metropolitan area.

Many train operators are resuming operation after checking the safety of their railways.

Officials at Tokyo's Haneda international airport said they have confirmed the safety of its four runways. They also said no damage to the facilities has been reported so far.

Narita international airport officials say no damage was reported to the airport and regular flights have not been affected.