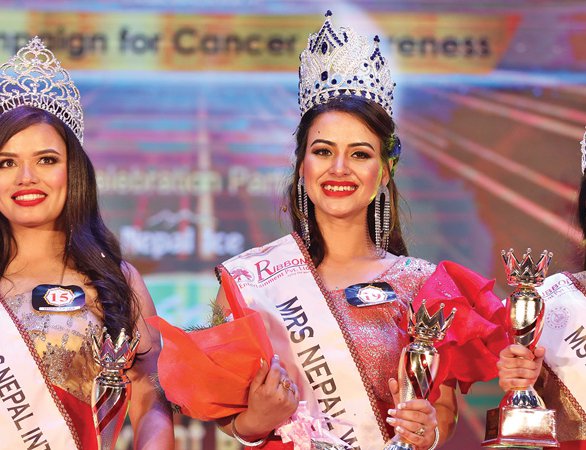 Diksha won the title by answering a question—‘Which social issue you will bring forward after winning the title?’ asked by Anuradha Koirala, chairperson of Maiti Nepal in the finale of the competition.

She also won the title of Galaxy Jumbo Basmati Rice Lady with Compassion. After winning the title of Mrs. Nepal World, Diksha will represent Nepal in the International Beauty Contest Mrs. World to be held later this year.

Nepal is participating in the international competition of Mrs. World for the first time this year.

Franchise has been arranged to make the winner of Mrs. Nepal World participate in Mrs. World from this year, said Nishukant Jha, chair Ribbion Entertainment.

After winning the titles, they will also represent Nepal in Mrs. International and MS International to be held in Singapore. Usha also won Must Talent and Must Bold titles.

Famous actress Gauri Malla was honoured with the honourary title of MS Nepal by offering a shiny crown.

In her honour, Binu Shakya and Shree Laxmi Thapa performed and danced to songs from different periods.

New Data On Nepal PLHIV Stigma Index 2.0 Indicates The Need To Create Arespectful And Equal Environment For PLHIVs In Community And Workplace By NEW SPOTLIGHT ONLINE 1 day, 9 hours ago

Melamchi’s Water To Be Distributed By December 13 By Agencies 3 days, 2 hours ago