At a time when the country’s economic indicators are in a bad shape due to the global conflict and COVID-19 pandemic, no one needed to analyze what Nepal’s annual budget for fiscal year 2022/023 would look like. Increasing salary, minister Janardan Sharma tried to woo the civil servants. Reducing the age limit for social welfare, the minister has made another effort to make political gains. Announcing dream projects like fast track, construction of mega airport and hydropower, the minister unknowingly is pushing Nepal to go to a financial debacle. Looking for the coming two elections, Minister Sharma presented a budget full of populist packages rather than saving the economy 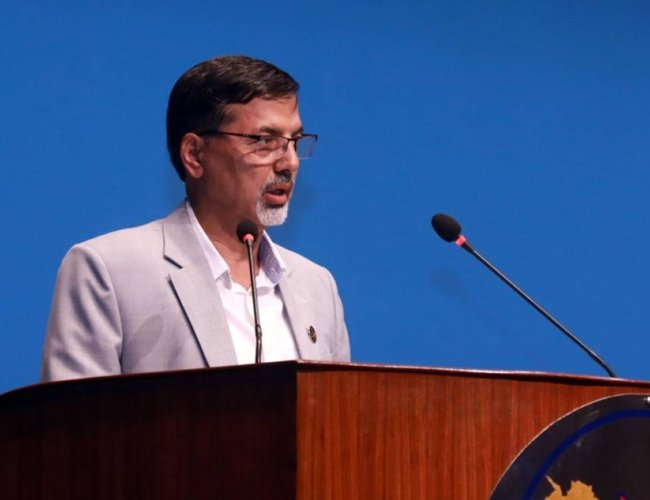 Drawing severe criticism from his own party colleagues and economists, the finance minister of Nepal’s coalition government has claimed that the goals set in the budget estimates for the financial year 2022/23 will be implemented as intended.

Minister Janardan Sharma presented the annual budget worth a total of Rs. 1793.83 billion for the upcoming fiscal year of 2022/023 at the joint session of the federal parliament on 29 May, Sunday. Compared to the last year, this year's budget is up by 8.87 per cent.

To convince his critics and defending his move, Finance Minister Janardan Sharma urged all sides not to worry about the implementation of the programs presented in the budget for the coming fiscal year.

Stating that the budget is a multi-faceted issue, Finance Minister Sharma said that the issues of increasing employment, developing infrastructure and import substitution have been given priority in the budget by making maximum use of the resources available. He expressed confidence that the forthcoming budget would make the country prosperous and address the development aspirations of the Nepali people.

Although he defended his budget for entire two hours of his press conference, finance minister Sharma also conceded that there was the need of commitment and support from all. He said the budget demands commitment from all walks of life for its implementation. 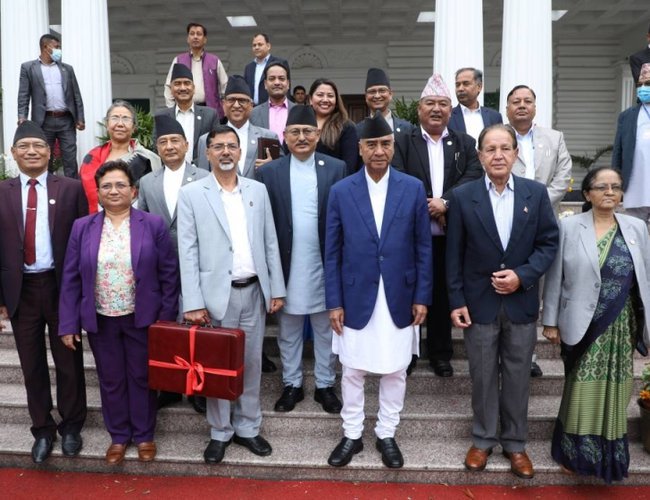 The Finance Minister said that the government intends to reduce the trade deficit by exporting cement. "We have decided to give cash subsidy and exemption in electricity tariff to the industries to promote export," he said.

He also claimed that the economic growth would be eight percent as the budget was prepared to set the target for the first time in every sector. Everyone has a sense of belonging to this budget as the suggestions of all have been taken into consideration in the budget formulation.

Finance Minister Sharma clarified that the budget has come with the idea of developing a self-reliant economy, with special attention to the agricultural sector.

"The goal is to reduce imports, increase exports and expand employment. We have specified all the areas. The challenge is to implement it. The main focus of the budget is to work by making the government machinery and employees enthusiastic,” he said. The budget aims to lift eight million people a year out of poverty.

Considering the fact that the private sector contributes more than 70 percent to the economy, the budget has been prepared to encourage it for production, said the Finance Minister. He shared that attention has been paid to the development of the economy based on internal revenue and the budget intends to gradually reduce the customs revenue.

With the increase of fuel prices, the government is facing all out criticisms. The finance minister said that the government was planning to reduce the price of fuel by reducing the tax levied as infrastructure tax.

The Finance Minister informed that the foreign aid received in the current fiscal year has decreased from 35.64 percent to 30.87 percent.

Nepal's economy is expected to expand by 5.8% in the current financial year ending mid-July, helped by a pick-up in economic activity following a fall in COVID-19 cases, the finance minister said.

The growth estimates were higher than 4.3% year-on-year growth in the previous year, but lower than earlier projection of 7% growth for the current fiscal year, as the rising energy and food prices have hit consumer spending and firms' investments.

Nepal has ended almost all pandemic-related restrictions, imposed to curb the spread of the novel coronavirus and took several steps to revive the economy hit by the pandemic."As the impact of COVID-19 is minimal, the economic and social life is becoming normal," Finance Minister Janardan Sharma said, presenting the annual budget in the parliament for the new financial year beginning mid-July. He said economic indicators except those relating to external sector, were "satisfactory".

Sharma said the government would soon reduce fuel prices which were increased by up to 12.5% last week saying global prices had spiked in the wake of Russia's invasion on Ukraine but gave no details. The government has banned luxury goods imports until mid-July amid dwindling forex reserves, which fell 18.2% to $9.61 billion on mid-April from mid-July, according to the central Nepal Rastra Bank (NRB) data. Officials said the pandemic would not have much impact on economic activities by mid-July when the current financial year ends. 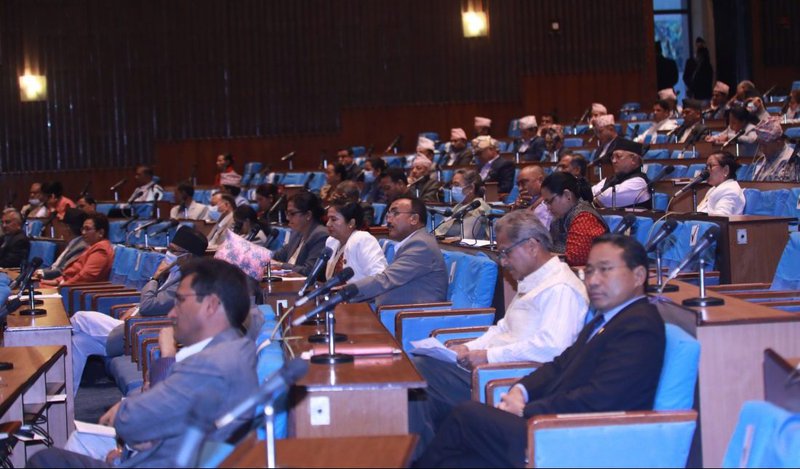 The budget for the next fiscal year 2022/23 received mixed reactions from economists, politicians and businessmen.

Former Finance Minister Barsaman Pun said that the budget estimate for the next year was positive as it targets production sector. “Budget target of promoting agro production which leads the economy towards self-reliance is positive,” he said.

CPN UML leader and former Finance Minister Surendra Pandey, however, said that the government brought a baseless and distributory budget targeting the election.

“Except for promoting the use of electric stoves in households there is nothing exciting in the budget,” he said, adding that policy and priority was somewhere and the budget was directed elsewhere. He also said the budget neither can maintain fiscal discipline nor can it meet the targets.

Similarly, Dr. Baburam Bhattarai, former Prime Minister, said that the budget excluded plans for transformation, rather it preferred improvements with gradual progress. “Ambitious targets cannot be met, it could be a better spice for the election to lure voters,” he said.

Likewise, economist Dr. Chandra Mani Adhikari said that the priorities and thoughts carried by the budget are comparatively good, but it has not maintained concrete policy for addressing the present challenges of the economy such as liquidity crunch and foreign currency reserves.

The budget is large in size and it is difficult to manage resources for the budget such as revenue mobilization and foreign grants and loans, he said.

The revenue target of the government for the next fiscal year is difficult to meet while it is also not easy to achieve the target of economic growth and control inflation at 7 per cent, he added.

Senior vice-president of Nepal Chamber of Commerce Kamlesh Agrawal said that the programs included in the budget are positive and industry-friendly.

“Most of the priorities of the budget are good but implementation of the budget looks challenging. It will be challenging to collect revenue of Rs. 1,240 billion while the government has tightened the import,” he said.

The target of fulfilling the deficit of the budget from domestic borrowing is also challenging, he said.

He said that the budget has failed to focus on export promotion.

Senior vice president of the Federation of Nepalese Chamber of Commerce and Industry (FNCCI) Chandra Prasad Dhakal said that the government has introduced the budget by incorporating suggestions made by the FNCCI which has encouraged the private sector in the field of investment. 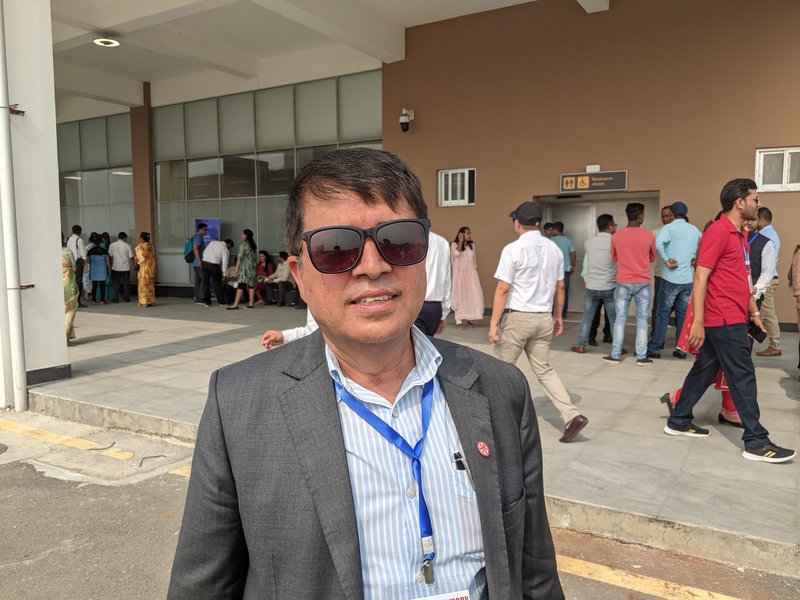 The budget has given priority to give discounts on tax while investing in Karnali and Sudurpashchim provinces for a certain period which is also positive, he said.

He, however, said that the implementation part of the budget is more challenging in the coming year.

The government has increased the monthly salary of its employees by 15 per cent. Presenting the budget for the fiscal year 2022/023 finance minister Janardan Sharma said that the increased salary of government employees and civil servants including the police and army will come into effect from July 17.

Existing inflation allowances are also continued for the next fiscal year.

Minister for Finance Janardan Sharma has said the budget for the upcoming fiscal year 2079-80 BS (2022-23) is a take-off point towards production economy from an import one and towards inclusion from exclusion.

While announcing the budget in the joint session of the Federal Parliament, the Finance Minister said the nation's economy was on the path of recovery after the COVID-19 crisis and the revenue collection in the current fiscal year was satisfactory. 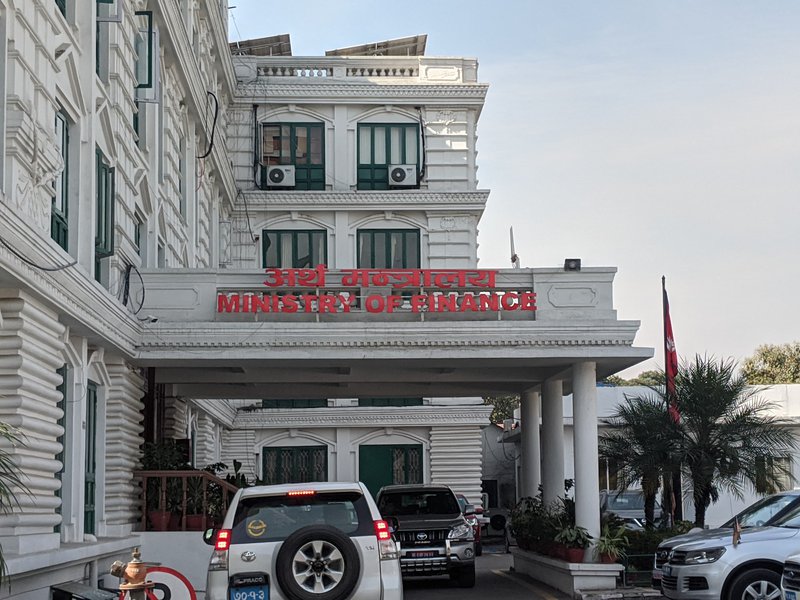 Through the budget, the government targets to minimize the imports of grains: rice, maize and wheat by 30 per cent. In addition to this, it plans to establish 100 food warehouses across the country and implement the ‘farmers’ pension program. For the seed capital of this program, it has decided to allocate a budget of Rs one billion.

Enhancement of fiscal discipline, a transformation of agricultural sectors, innovation-based economic development, recovery of tourism sector, promotion of hydropower sector and effective administrative service are other commitments of the budget.