Nepal Is Not A Part Of SPP: Home Minister Khand

Nepal Is Not A Part Of SPP: Home Minister Khand 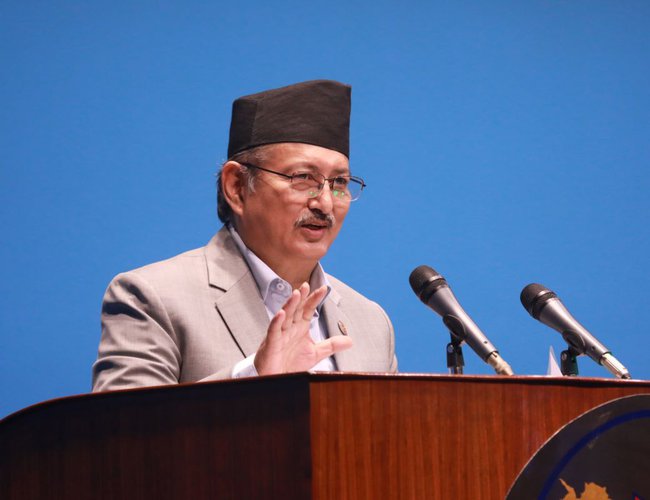 The government has made it clear that it has never imagined being part of the State Partnership Program (SPP) of the United States of America (USA).

Home Minister Bal Krishna Khand, on behalf of the government, said the government strongly believes that Nepal’s territory should not be allowed to be used against any of its friend nations and is committed to its belief and position.

Airing his views in a meeting of the House of Representatives (HoR) today, the Home Minister said, “Nepal is not connected with the SPP, no decision has been made towards this end, it has not imagined of proceeding towards that end either.”

Stating that Nepal was dealing with the national security and defence affairs as per the provisions in the Constitution, the Home Minister said Nepal and the USA continued to see bilateral goodwill visits and exchanges of regular assistance since the beginning and a recent visit from the USA was the continuity of the same culture. He said this while giving his replies in regard to issues raised during the deliberations on the Appropriation Bill on behalf of the Ministry of Defense in the HoR session.

Responding to supplementary questions from lawmakers, the Home Minister defended the endorsement of the Millennium Challenge Corporation ( MCC) pact and said the document was passed on the basis of consensus and Nepal had no its involvement in the SPP. “We consider and recognise the MCC as a pure development project instead of any military project and it was endorsed with descriptive notes accordingly. We are now denying our involvement in SPP, we walked the talk in regard with the MCC and we are also committed to living up to our words in regard with SPP.” He retired that Nepal would never ever be part of SPP.

According to the Home Minister, schedule of Prime Minister Sher Bahadur Deuba’s visit to the USA has not been finsalised yet. His statement followed the demand of lawmakers to be informed about the Prime Minister’s visit planned for the USA. The House will be informed once the schedule is fixed. He took time to say before the House that Prime Minister, ministers going for official visits to various countries is customary.

Responding to queries raised in course of Kathmandu-Tarai-Madhes fast track construction, Home Minister Khand shared that this road is different than other roads. He briefed the House that the Nepali Army has taken the challenging work and 19.83 per cent progress has been achieved so far.

The Home Minister opined, "Tunnels, as well as tall bridges, have to be constructed at different places. So it took long time. I believe that there will be safe travel after the completion of the fast track."

He also admired the Finance Minister for putting forth the plan of constructing a tunnel route in the recent budget programme.

The Nepali Army with their professional responsibility has constructed 32 roads in difficult geographical territory. It has been constructing five big projects of difficult territory including Kathmandu-Tarai-Madhes fast track in the current fiscal year, mentioned Minister Khand.

He said the Nepali Army has searched and rescued 4,204 people in course of disaster management, and rescued 138 mountaineers and new mothers.

The Home Minister added that a process to make Nepali Army inclusive has begun, adding suggestion received on the issue of making the Nepali Army more professional was positive.

He shared that a process for the establishment, operation and management of National Resilience University has been forwarded by forming an infrastructure development committee with the objective of producing human resources in the security sector. (RSS)

Melamchi’s Water To Be Distributed By December 13 By Agencies 4 hours, 19 minutes ago