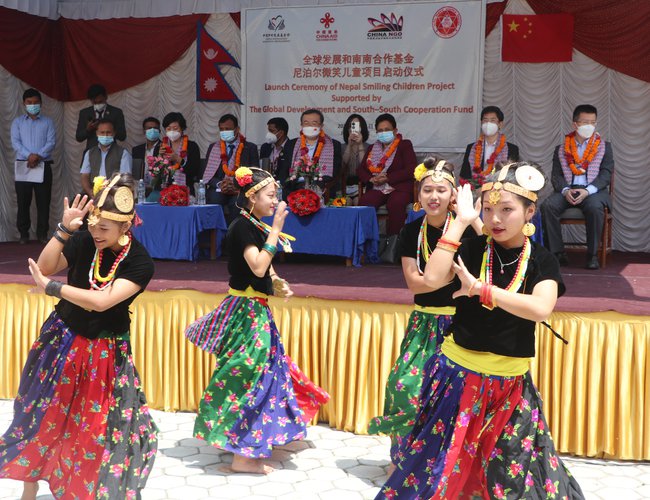 The project was launched by offering food to students of Kathmandu Shanti Nikunja Secondary School.

On the occasion, the Minister said, "Nepal is following the path of prosperity with the establishment of federal democratic republic system in the nation. She took time to speak on the need of economic and technical support of neighbouring China to accelerate its journey towards prosperity. "Economic development is a must to implement fundamental rights guaranteed by the Constitution. We need China's assistance for the same. "

Similarly, she hoped to get support from China in Nepal's industrialization and economic development endeavours.

Stating that Nepal and China the deep people- to- people relations between the two countries for centuries, the Minister said, "Friendly ties between the two nations are getting further consolidated on the basis of peace and co-existence. Mutual trust, cooperation, assistance and respect are the essences of bilateral ties that are founded on the principles of Panchasheel. "

"Nepal is significantly benefitted from China's economic and technical support majorly in the areas of infrastructure development, health, education, water resources and sports. Nepal acknowledges the assistance from China in the poverty alleviation sector as well," the Minister said who also recalled opportunities for Nepal students to pursue higher studies in China.

"China is always Nepal's true friend during both good and hard times," she said, expressing gratitude for its unconditional support during the 2015 major earthquake and COVID-19 crisis in Nepal.

Similarly, the CPC senior leader described Nepal as a good friend of China and said he was hopeful that the bilateral ties would further get expanded to the people's level.

Terming children as the future of any nation, he said, "Children are the future of Nepal-China friendship. When they are happy, their happiness will add a new dimension to the bilateral relations, further consolidating it." He also pledged continued support to Nepal's educational development through the Global Development and the South and South Cooperation Fund.

On the occasion, it was shared that the Smiling Project has been launched in 35 schools and its beneficiaries are around 500 thousand children. (RSS)

One Died And Scores Of Building Damage In The Bajura Earthquake By Agencies 6 days, 10 hours ago