Although it has gone through several disruptions caused by the Covid-19 pandemic and restrictions, including lockdown and supply constraints due to border closure in Kerung, the 37-MW Upper Trishuli 3B Hydro Electricity Project (UT3BHEP) has been making a big progress in civil works. Led by Managing Director Mohan Gautam, who has an experience of working in construction of Upper Tamakoshi Project and establishment of office of Dudh Kosi Storage project, Trishuli Jal Vidyut Company Ltd has been making every possible effort to accelerate the pace of construction and complete the project by September 2023. However, the big challenge is to bring the hydro-mechanical hydro-electric equipment in time from Kerung border 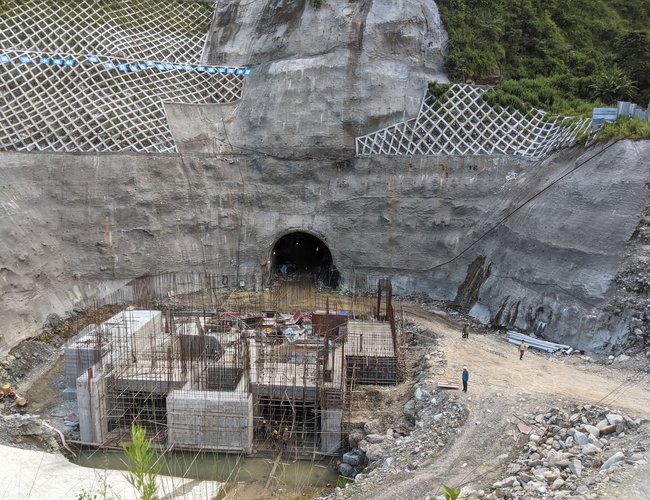 After almost two years of COVID-19 pandemic and lockdown, Upper Trishuli 3B, though it is at a slow pace, is now accelerating the speed of construction. As the pace of civil work is taking pace, the challenge before the project now is to bring all the hydro-mechanical and hydro-electric equipment in time.

With work virtually stalled for a year, the project has geared up its speed following Kul Man Ghising’s return as Managing Director of Nepal Electricity Authority and Chairman of Trishuli Jal Vidhyut Company Limited a year back. His directions have helped to accelerate the pace of civil work in UT3BHEP. The progress made in the construction of tunnel, power generation plants and other civil works are the testimony to this. 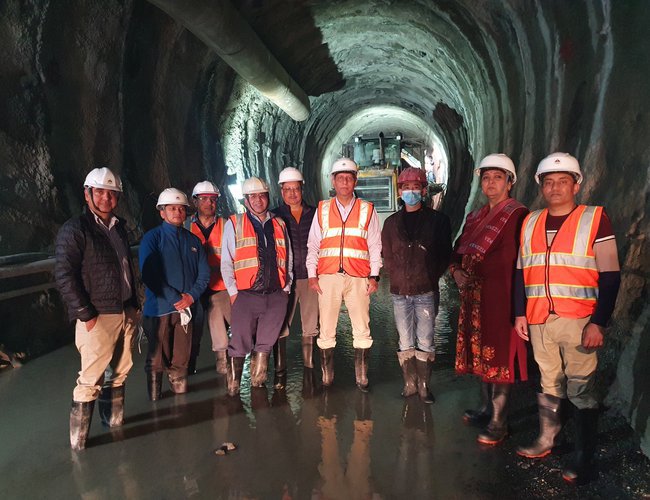 Despite facing severe crisis of Covid-19 pandemic followed by health protocols and lockdown, 37 MW Upper Trishuli 3B Hydropower Project has made a progress completing almost 86 percent of civil work.

Progress Of Upper Trishuli 3B Project

Out of 3796.85 meter long Headrace Tunnel Excavation, 3334m (87.8 percent) has already been completed. Audit-1 and Audit-2 of lower stretch of headrace tunnel have been completed. Now contractor has completed invert clearing and started rock bold work for permanent support.

After rescheduling the Headrace Tunnel Excavation, the target for breakthrough of the tunnel is fixed for December 2022. However, there are certain challenges to complete the excavation of tunnel. Due to weak rock obtained in tunnel, the excavation work has been delayed.

Stone and mud flows from the upstream Audit-1 of headrace tunnel created a sink hole over the open space of the tunnel. It has hampered several excavation efforts. It is realized now that there is the need to re-align the tunnel which is likely to increase the length, Due to this, the completion of the tunnel is likely to take longer.

Slope excavation work has already completed. The support work on the slope like Rock bolt, Wire mesh, Concreting, Grid beam and Tendon has also been completed. 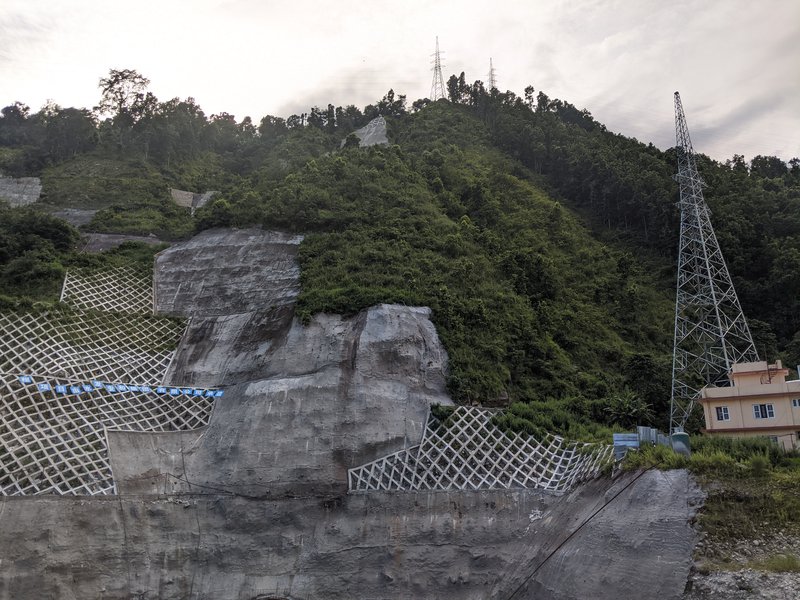 Likewise, 24.68 percent of the structural concreting work in powerhouse has completed and draft tube installation in powerhouse is currently undergoing.

Out of 115.06 meter long Tailrace, the excavation of 85.62 percent has already completed. Similarly, 27.49 percent of structural concreting work in Tailrace has been measured so far.

The project has also made a progress in detail design construction for hydro mechanical works: Trash Rack, Intake Stop log, Penstock Pipe, Penstock Bifurcation, Draft Tube Stop log, Penstock Stop log, Intake Gate, Water Tight High Pressure Access Door at Audit 2, Penstock Pipe joint and Hydro mechanical System (Part 1) have already been approved. The manufacturing of Hydro mechanical related parts and equipment started in September 2021 and transportation started in April 2022, and installation of some of them have already begun. However, the process has recently slowed down. 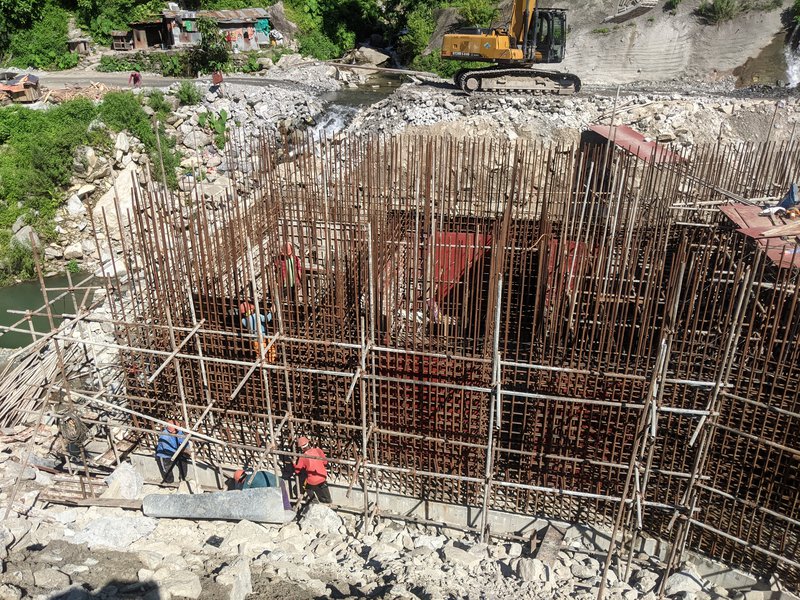 The installation of Draft Tube Elbow and Draft Tube Cone has begun. The manufacturing of powerhouse EOT Crane, Main Inlet Valve has also completed. Currently, the manufacturing of Spiral case and Stay ring and Power transformer is underway. The work related electromechanical parts and equipment started in January 2021 and the delivery of those products in project sites started in March 2022.

The power generated by the project will be evacuated through 3 kilometer long 132 kV transmission line connecting to Nepal Electricity Authority’s Trishuli 3 B Hub in Samudratar. As per the agreement between the company and NEA, NEA will bear 45 percent and company will bear 55 percent of the cost for the project. NEA will appoint a separate company to construct the transmission line.

Due to much weaker rock and geological condition than expected in early design, there was the need to re-align the tunnel which is likely to increase the cost of the project. However, this escalation cost has been included in the total project cost because such possible increase of cost was predicted earlier. It will cover much of the cost escalation.

Continual depression of Nepalese currency against US Dollar is leading to increase the cost of project. However, the price contingency provision in total project cost will cover a large amount in it. 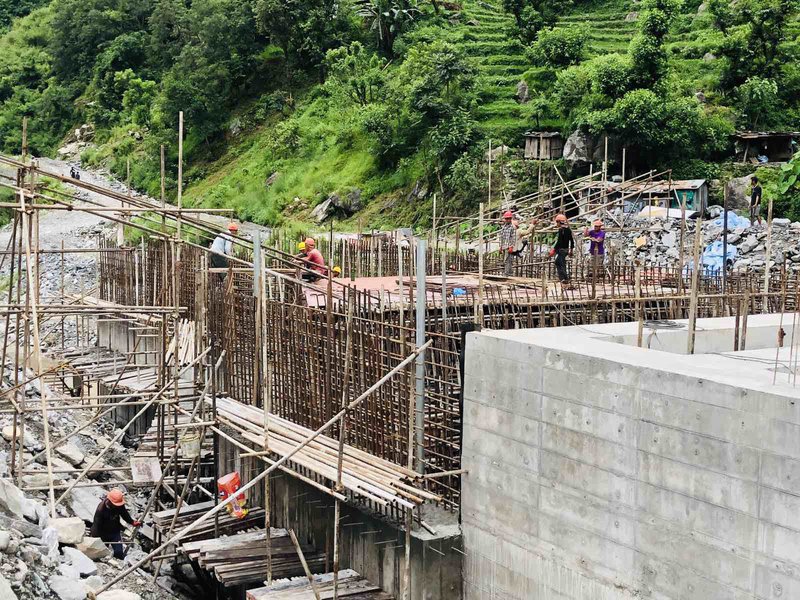 The company has already taken several mitigation measures to solve the problems faced by the project to complete it by September 2023. One of the major challenges is continual price rise. Due to this, the contactor is facing the cash flow disturbance on its capacity to purchase construction materials. This hampers the pace of the work.

Due to cash flow situation, the manufacturing of EM/HM equipment is yet to start.

Amending the process of LC, the company has proposed to provide 20 percent interim advance payment against the bank guarantee after the design approval of electromechanical and hydro mechanical equipment.

"Concreting of structures has started after completion of excavation of surface power house; work is being done with the aim of concreting the first phase by connecting electromechanical equipment and parts," said Gautam.

Situated in Rasuwa and Nuwakot district, the 37 MW Upper Trishuli 3B Hydropower Project is a part of the People's Hydropower Program. The project has also started issuing share after permission from SEBON. 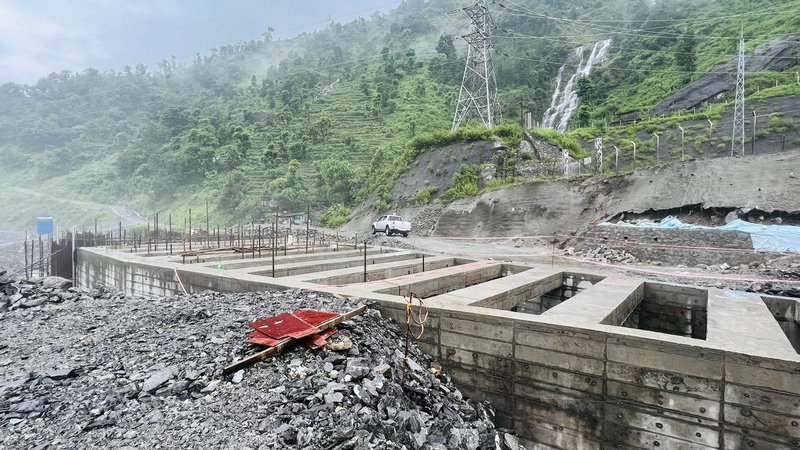 With proper guidance and committed management, the project has now achieved every target completing over 65 percent of work by the second week of July 2022 on the way to completing the project by its 2023 September target.

Managing Director of Trishuli Jal Vidhyut Company Limited Gautam, who has been working quietly mobilizing the contractors, is seeking to remove the remaining hurdles to bring the equipment in time.

With complete backing from NEA’s management and the Minister of Energy, Water Resources and Irrigation, MD Gautam and his team have quite efficiently handled all the processes of construction of UT3BHEP.

Project manager Anandna Dhugel has been leading and coordinating the construction works at sites. According to him slope excavation work has already completed. The support work on the slope like Rock bolt, Wire mesh, Concreting, Grid beam and Tendon has also been completed.

By using his technical capacity and managerial experience, Gautam is now moving in his plan to bring the work to the pace of that before the outbreak of the COVID-19 pandemic. The management now wants the same to repeat.

Despite facing a severe crisis of the Covid-19 pandemic followed by health protocols and lockdown, 37 MW Upper Trishuli 3B Hydropower Project has made a progress completing 65 percent of work. 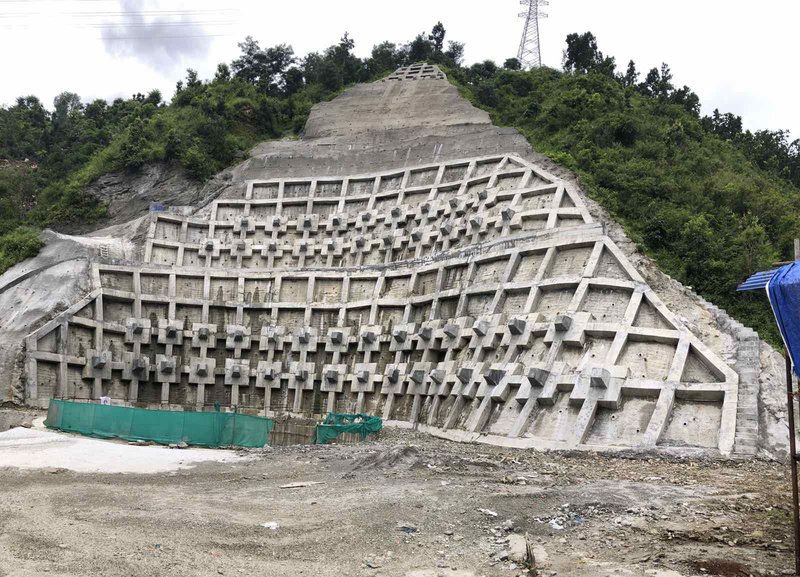 "Concreting of structures of powerhouse is underway and some hydro-mechanical component has also been installed at the basement. He said that the work is being done with the aim of concreting the first phase by connecting electromechanical equipment and parts," said project manager Dhungel.

The estimated construction cost of the project is Rs. 7.44 billion. The construction of the project, which was in full swing, was halted for about 15 months as Chinese workers, who had gone home in the second week of January 2020 to celebrate the New Year, could not return due to COVID-19 and equipment and materials could not be brought from China.

The construction of the project was resumed only from April 2021, but the work was again affected for about three weeks due to the second and third waves of COVID-19.

Also, construction was affected by the discovery of a much weaker rock than previously estimated in the main tunnel. Contractor Chinese company Shuifa ANHE Group Co. Ltd. is currently constructing main structures, including intake, main tunnel and powerhouse.

The contract agreement was signed with Shuifa ANHE Group Company on February 12, 2018, for the construction of the project in the Engineering, Procurement and Construction (EPC) model. 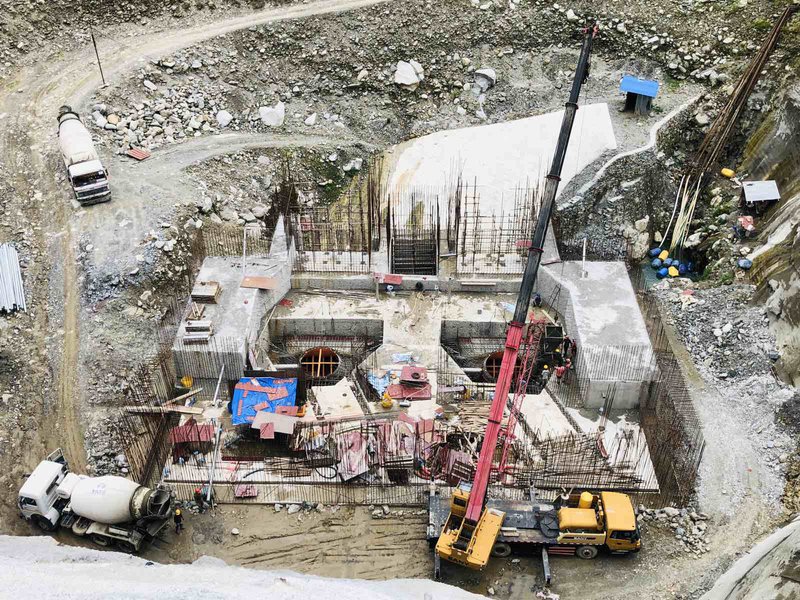 The contractor company will design, construct, connect and operate all the civil, electromechanical and hydromechanical side structures and equipment of the project.

The electricity generated will be transmitted to the national grid through the existing Samundartar Trishuli 3B transmission line.

The period from November to the first week of June is regarded as the best time to achieve progress in the civil and other surface construction work because of favorable weather. Following the onset of the monsoon in June, progress has slowed down. Although everything is going well now, given the present scenario of manufacturing and installing equipment, there might be a delay of few more months in completing the Project.