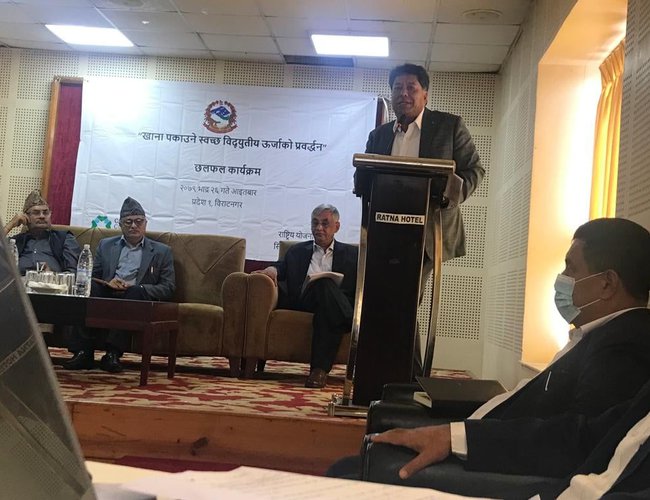 To materialize the federal, provincial and local governments’ announcements to reduce the LPG in kitchens, National Planning Commission and Clean Cooking Alliance (CCA) have jointly launched the promotion of eCooking Campaign in Province 1 in Biratnagar.

Attended by representatives from key stakeholder groups in the Nepali electricity and clean cooking sectors including from provincial government, civil society organisation, and the private sector, academia and the media.

Inaugurated by Member of National Planning Commission Professor Dr. Surendra Labh Karna, this is the first of its kind organized aiming to materialize the federal government’s announcement to replace LPG with electric cooking.

Addressing the program NPC member Professor Dr. Karna said that Nepal has no option other than to go for eCooking to reduce the import of LPG helping to ease the pressure on foreign currency reserves. He also stressed that our choice is to have a healthy life, and come out of being sick of smoke using wood in our kitchen.

Chief guest Professor Dr. Karna said that the presence of high-level officials from the province and Biratnagar Metropolitan City, members of the Provincial Planning Commission, civil society, the private sector and other stakeholders indicated the deep interest of the provincial and local level government in the Province 1. 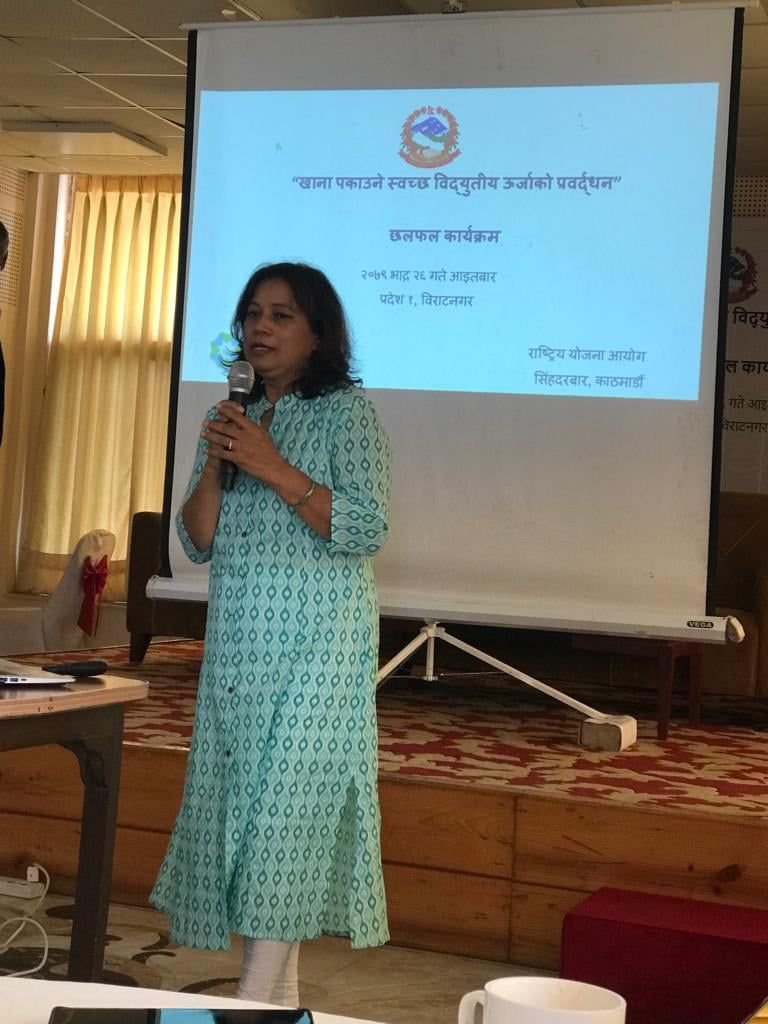 Bajracharya also highlighted technical aspects of eCooking comparing the cost and health benefits for the people. She said that electric cooking is much cheaper than LPG. She informed policymakers and investors of the clear opportunities for scaling eCooking in Nepal based on the findings of study research and pilot carried out by CCA in Nepal in various municipalities. The pilot studies were the first large-scale, evidence-based research on electric cooking in Nepal.

She said that the significant and sustained consumer demand for eCooking in all piloted areas showed that there are clear opportunities to expand uptake through a combination of targeted interventions and policy.

Bajracharya also said that there is strong support for eCooking from key government agencies, Ministry of Energy, Water Resources and Irrigation, NPC and AEPC.

From the chair, Planning Commission member of Province 1 Dr. Gyanendra Bahadur Karki said that the commission is ready to work in collaboration with NPC and CCA to promote e-cooking in province 1. Member Dr. Karki said that there lack the infrastructure including distribution lines, quality and an uninterrupted supply of electricity. He said that the province is doing its best to promote electric cooking despite such hindrances.

Mohan Das Manandhar, policy expert overviewed the impact, challenges and current state of electric cooking in Nepal. He said that the Provincial Governments and Local Governments have a key role in Nepal’s current energy transition.

Manandhar said that there needs to have a strong collaboration between all three tiers of governments, civil society organizations and the private sector to materialize to reduce the LPG and use of electricity in cooking. 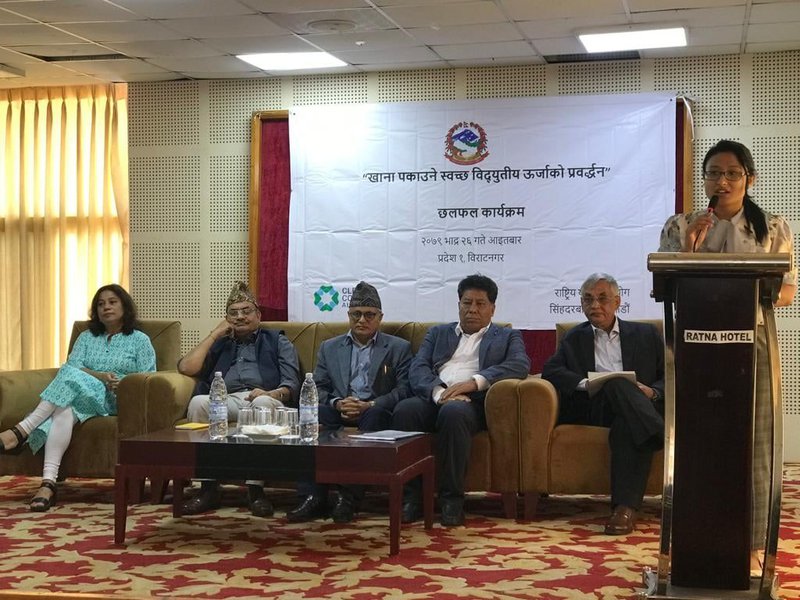 He said that the government needs to invest in improving the distribution and transmission system to provide quality and reliability of electric supply to citizens. He stressed that the government has committed to achieving “one family one electric stove” and will provide subsidies for poor, excluded and disadvantaged families. However, people who can afford should invest in eCooking to come out of dependency on imported LPG.

Government and senior officials stated that they need to promote the use of eCooking in the urban areas as distribution is more reliable than in rural areas and that the focus on commercial use - in hotels and hospitals as their usage is high and during day time. They will balance the peak load in the morning and evening.

According to NEA officials, there are surplus powers in the daytime and less pressure on the distribution center during day time.

Energy Efficiency Bureau of Province 1 is working on standards and monitoring of quality of stoves which the government will soon bring to the province. “The provincial Government will distribute the induction in a few areas as a promotion,” said Karki, member of the Planning Commission of Province 1.

Moderated by Purushottam Ghimire, participants expressed their views that the current electricity distribution infrastructures are weak and insufficient to promote eCooking at a mass scale.

They also stressed for an uninterrupted and reliable supply of electricity, the availability of quality stoves and manpower for maintenance is key. Participants from the private sector stressed that they are ready to invest in manufacturing eCooking stoves in Nepal with the accountability of warranty and guarantee and requested government to make the made-in Nepal product to be more competitive by increasing customs duty and tax to the imported induction and infra-red cooking stoves. 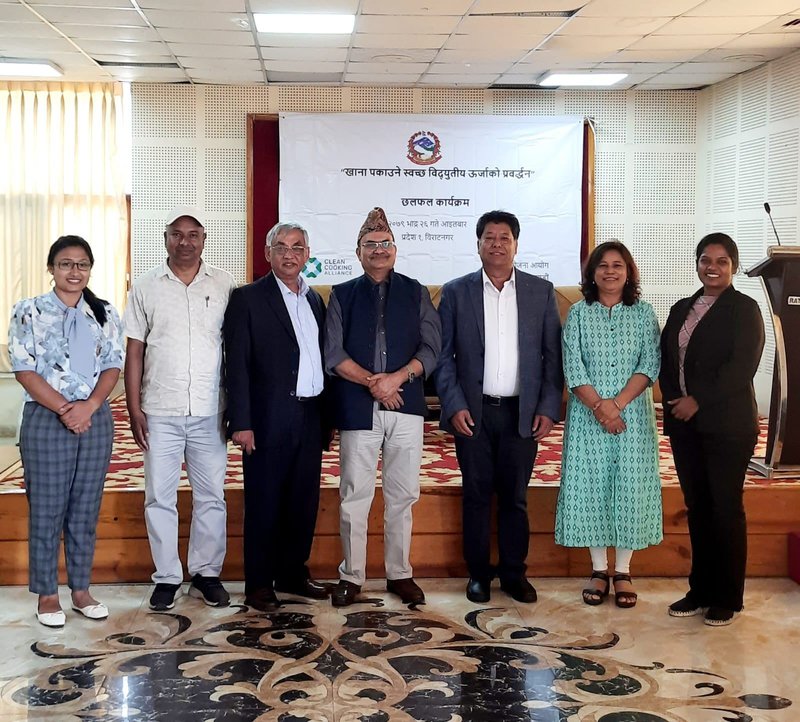 The media and civil society stated that people are unaware that eCooking is much cheaper than LPG. They stressed the need for further awareness campaigns to generate awareness among people.