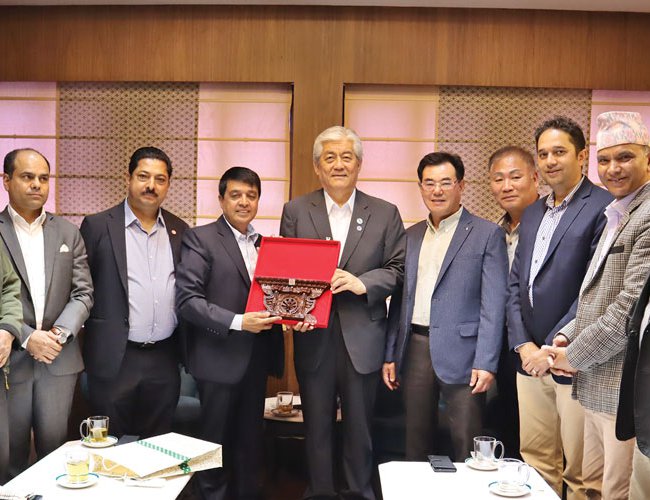 Officials from the Federation of Nepalese Chambers of Commerce and Industry (FNCCI) have discussed the issues of expanding trade, tourism and investment with the three-member delegation from South Korea’s National Assembly currently in Nepal on an official visit.

FNCCI officials, including Acting President Chandra Prasad Dhakal, met with the delegation, headed by National Assembly member Lee Sangheon, at the Chamber’s secretariat in Kathmandu on Monday and discussed the issues.

Speaking on the occasion, Dhakal noted the need for the private sectors of the two countries to cooperate to bring in investment, technology and experience. He also said that Korea’s economic development could be a model for Nepal.

Dhakal also told the Korean delegation that investors could get big returns from investments in Nepal.

FNCCI also shared that Nepal could host some of the Korean industries by ensuring power supply, cheap labour and good market.

Meanwhile, Lee expressed that Korea was always ready to help Nepal in its development and said that they would extend all necessary assistance to the Chamber.

NIBL Wins "The Banker" "Bank Of The Year 2022" Award By NEW SPOTLIGHT ONLINE 3 hours, 17 minutes ago