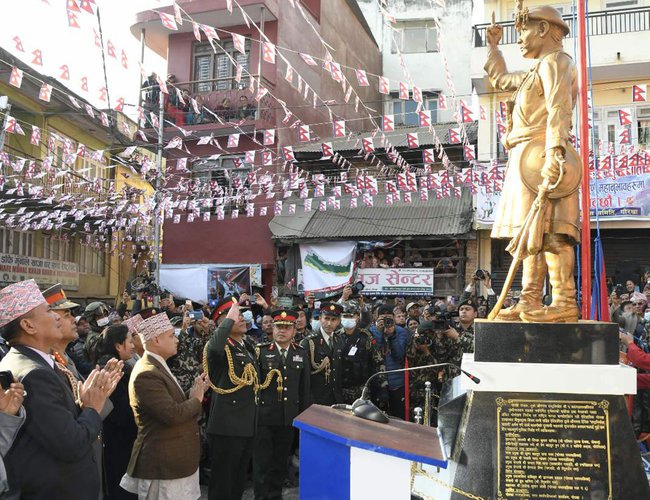 At a ‘statue unveiling and flag hoisting’ ceremony’ organized on the occasion of the 301st Prithvi Jayanti in Gorkha today, he claimed strategic thinking, strong determination and visionary leadership of the nation-builder Prithvi Narayan Shah was the foundation of the country.

“It is the prime responsibility of the Nepal Army to protect the rights and welfare of the Nepali people by safeguarding Nepal’s independence, sovereignty, territorial integrity and national unity as well as the key national interests”, Army Chief Sharma noted.

The NA has been contributing to keep the national unity by preserving citadels, forts, palaces and art and culture among others across the country.

He further viewed that guidance of the founder of the Nepal Army and nation-builder in the broader spectrum of economic, social and foreign policy of Nepal was still worth-internalizing today.

Sharma claimed that Divyoupadesh (a collection of teachings) of Shah in regarding to the national security strategy, diplomacy and national unity was proved spectacular for protecting the glorious history of the country.

Earlier, Army Chief Sharma had offered floral tribute to the statue of the nation builder at a function organized at the NA Headquarters today. (RSS)